Drama, poetry and other words as summer returns 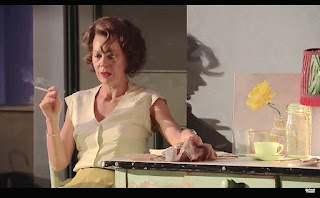 Drama first: The National Theatre continues its stream season of major dramas with Terence Rattigan's classic The Deep Blue Sea, an emotional saga of misplaced passion in post-war England. Here's Helen McCrory, frustrated, neurotic, and exquisitely lovely even when suicidal - which is most of the play. She has left her husband (Peter Sullivan, frankly too attractive for this role) for a semi-alcoholic ex-test pilot with whom she remains bafflingly besotted despite the fact he's inattentive, boorish and a bit overweight. There's a mysterious struck-off doctor who floats in like tumbleweed and a couple of parody middle-class lodgers.  Rattigan is still highly rated as was this production, so perhaps lockdown's made me tetchy about live production having a need to be either entertaining, amusing, or relevant. 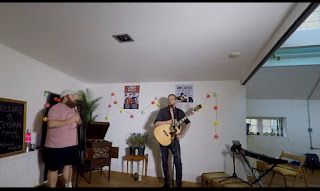 Love You and Hate Covid by Jonny and the Baptists is live-streamed from various arts centres: I watched it from Wiltshire's Pound Arts Centre in Corsham which turned out not the best choice as camera fail meant the whole show was filmed from a single distant viewpoint so it looked like you were peeking in from the foyer. I first saw this duo three years ago in their savage satiric drama Eat the Poor, which I raved about, and although their hearts are still in the right place ("You're either against capitalism or you're for the end of the world" says Jonny) they seem to have settled for a more unstructured, less seethingly indignant, format of basically just songs. 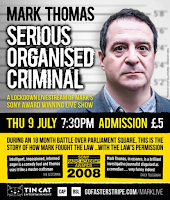 Another focus on our system's inequality, more focussed, incisive and funny, from Mark Thomas on Thursday evening: Serious Organised Criminal follows his 2007 live show by an update since this serious -funnyman started his campaign against the 2004 law to stop any kind of presence, however small or bland the message, without prior permission by the police -an Act of Parliament passed specifically to prevent Brian Haw from standing quietly outside the Houses of Parliament where he had for three years held a one-man anti-war protest. Mark, like many others outraged that any kind of public opinion had at a stroke become a criminal act - 'so kendal-mint-cake eating ramblers are now on the same footing as Al-Qaeda' - decided to challenge this nonsensical injustice.

The filmed show tells the full story, involving absurd existential complaints each of which, after a raft of paperwork, was permitted to be displayed in public gaze, with the real protest aimed at the control of legitimate freedom. The movement swelled, Mark became good friends with the officer in charge and gained an international following. After a quick break, Mark in real time discussed events since, including his McDemos scheme to continue this patient non-violent policy of ridiculing the illegitimate control of free speech. 'It's a challenge to this legislation that makes US accountable to THEM - in a democracy, this should be the other way round,' Mark concludes, and despite the nuisance he causes, many in the police force agree.  Not just a funny man from South London, a serious game-changer in a game that seriously needs changing. 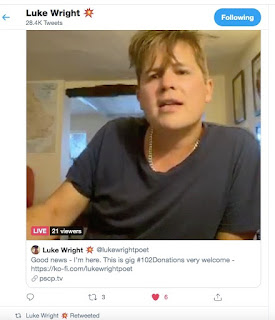 We're still all madly missing live music but Sofar Sounds offers an international selection of concerts and Cooper Hall in Frome is posting links to a series of their past performers - this link is to Hattie Briggs.
Frome's living legend Liv Torc continues a beacon of relevance, as her Haiflu project hit BBC4's Today programme - ff to 1.42 to hear Liv explain the concept, summed up in her own haiku: And nothing makes sense - but in telling the story- we learn who we are.
Frome Festival Poetry Cafe has endeavoured to keep a presence by images of previous Festival Laureate winners on our Facebook page. And Luke Wright is still sharing his poems on Twitter - Sunday night's session is number 102 - for those who enjoy being invisible observers at online sessions. He's very good. 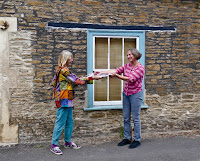 And for me, the lockdown launch of The Price of Bread continues to be major event. The second boxful is now more than half dispatched to new owners, with some gratifyingly appreciative reviews already received - here's me doing a socially-distanced bookswap with Liz Hutchinson, whose historical novel Dissenters, set in Frome, is also published by Hobnob. My novel is set in Belfast, and as the 12th July - big date in Ulster's calendar - approaches, it's sad to see this story of the 'Troubles' fifty years ago is still so relevant, with banned bonfires already blazing in Belfast.

Finally apologies to anyone trying to follow this blog on their phone - I realise it may look a mess. My system does now offer an alternative format which is promised to look less muddled on mobiles but it is inflexibly maddening for originating so I've joined the number of disgruntled users who've asked to return to the old way... sorry.  I'll end with an image from a walk just over the border from Frome - here's hoping you're all enjoy the returning summer sunshine. 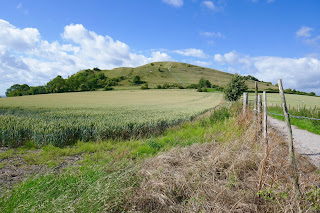