Bumper music week! from Mozart to Oasis, and a reason for hope. 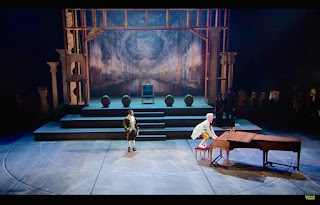 Amadeus this week concludes the National Theatre's summer season of streamed classics, and made a fitting finale. Being anhedonic where opera is concerned, that meant mainly a Falco song to me but the nearly-three hours of this 2018 production were sensationally gripping. For any other ignorami, Peter Shaffer's play is an epic tale of obsession in 18th Century Vienna as young Mozart's genius arouses the jealous rage of the court composer, who sets about ruining his career. Lucian Msamati is strong as envious Salieri, Adam Gillen plays Mozart as a cross between Vyvyen from The Young Ones and a Beatrix Potter squirrel. Mrs Mozart, the very pretty Karla Crome, was my other favourite, and also the dim Emperor Joseph II who apparently had even less musical appreciation than me.  Showing till 7pm July 23rd.

Hunting Raven Bookshop has not only re-opened in real-place but is also maintaining a strong online presence, as Tina Gaisford-Waller takes to the screen to promote some of her most fascinating new releases with zoom meetings.

Friday's session featured The Compassion Project, with a talk from Dr Julian Abel the Director of Compassionate Communities UK who, with Frome writer Lyndsay Clarke, wrote this 'true story of the town that beat loneliness.' Frome is immensely lucky to have moved in this direction through various initiatives and practices and the town's medical team led by Helen Kingston is a national leader in innovative health care. A fascinating session, as Julian explained how mutual compassion, rather than 'survival of the fittest', has always been deep in mankind's social psyche, and discussion also looked at experiences among indigenous peoples of Canada, and communities in Mexico and Columbia.

Music now, as one of Frome's most active bands returned to live performance - but first quick look at online guitarists. Tuesday offered an hour from the very entertaining Boothby Graffoe - his brilliant parody of our government can be enjoyed here - and  Thursday's unexpected find was Belfast lad David Browne Murray who plays sensationally well.

Also on Thursday: Young Somerset hosted a session in their series Bert Jansch 80 Plays around the world - gigs to raise funds for the Music Venue Trust. Back in the '60s, I saw Bert Jansch with John Renbourn at an all-nighter in London, and emerged blinking into the early morning sunlight to be met by a bizarre lady pushing a trolleyful of carrier bags which, she told us cheerily, held all her possessions as she lived on the street. (Ralph McTell also met her later in the decade, and wrote a song about her.)  It seemed extraordinary in 20th Century, wealthy, England... with more than 25,000 homeless now, that encounter in Leicester Square seems from another, much nicer, world. Anyway, here's a link to the original Angie. 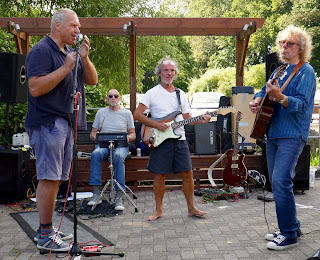 And now the exciting live reveal!
Paul Kirtley's current talented 'Bones' crew ('crew' seems a more appropriate than 'band' as they never have a set plan or rehearse, and personnel vary) put on a brilliant show for the outdoor diners at Rode Mill on Saturday afternoon. Social distancing - immaculately established by owner John and maintained by soundman Steve - didn't impede the barbecue or bar, and the session developed into a request set with dancing by early evening. 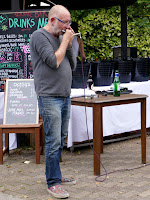 The lawns around this lovely old restaurant are perfect for picnics, too, with the river curling round them.

Returning summer sunshine has allowed more long walks again: from the southern meadows right along the reclaimed river path through Frome town, and beyond to the northern fields - there's a crop circle in one - with bursts of woodland and masses of wild flowers. Other routes like Vallis Vale and Nunney Brook, are within striding distance of my house too, and after so many discoveries it's a mystery now how there was ever time to organise any events and why I ever wanted to travel anywhere else...

Meanwhile my house waits patiently for the promised springclean - so I gave it some lilies instead, from Stuart's stall in the market place (which is now inaccessible due to road changes by the way. ) 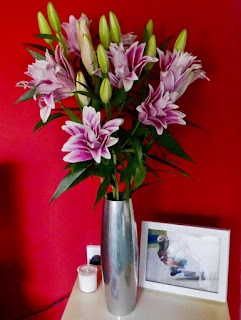