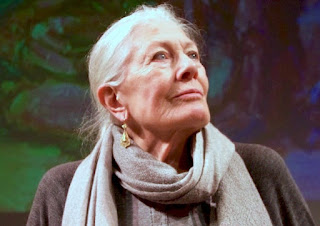 Drama first, as Vienna 1934 - Munich 1938  written, directed by, and featuring, Vanessa Redgrave, is showing at the Ustinov Studio in Bath until August 3rd. If this seems a strange name for a play, that’s because it is not a play, it is a scrapbook - a family album, its creator calls it.  Vanessa Redgrave, a stately and sparkling 82 year old, arrives on stage from the start to steer us through her collection of photographs of family and friends projected on screen behind her. Some then become animated and arrive onstage to speak for themselves, in scripts devised by Vanessa from journals, poems, and memories. She watches these cameos for much of the time. 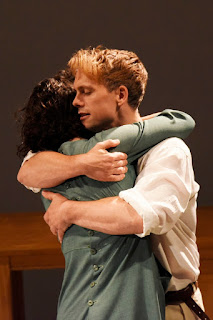 Her support team - Robert Boulter a charming Stephen Spender, Lucy Doyle delightful as feisty anti-Nazi Muriel Gardiner, and Paul Hilton mesmerising in all his roles (unforgettable as Koloman Wallisch at execution and Thomas Mann indicting England's collusion with Fascism) - all help to create the lost world of Europe before Hitler’s war.  It's a time of political struggle but still hope. Socialism is the language of all these people - poets and subversives, who all live to work for, and express the need for, all people to be free. ‘Everyone my father knew was a socialist’ says Vanessa in her programme notes. It is another world and, despite the atrocities, an innocent one.
The detailed events make this a hard story to follow, even with programme notes - and don’t go if you want indulgent memories of theatre in the ‘40s and ‘50s. Go instead to see what they never told you at school, even if you studied history, as I did right through university.  There is so much here that we all need to understand, even with hindsight, about the misdirections of national leaders and the courage of individuals. Image Nobby Clark 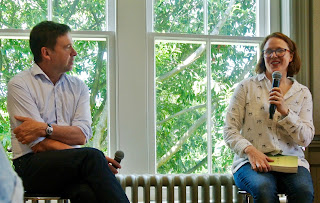 Back in Frome, life is settling down after the festival but not without words and music. Hunting Raven Books had one of their highly enjoyable 'Author Events', this time at the Town Hall (with sandwiches!) where manager Tina Gaisford-Waller was in conversation with fiction writer David Nicholls. Hard to believe it's ten years since One Day was the backdrop to summer for just about everyone I knew, copies past from hand to hand on beaches and poolsides everywhere - I still feel hot and sandy just looking at the cover. His new novel Sweet Sorrow looks set to be massively popular too. David was an actor before he became a novelist and screenwriter, so he knows how to hold an audience, and as Tina shares this skill the discussion was highly enjoyable, giving fascinating insight into the craft of structuring storyline and creating credible character. 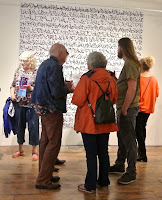 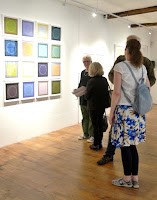 On Friday Black Swan Arts hosted an exhibition launch to celebrate their 'LISTEN - Summer of Sound' project, which will involve a wide range of audial treats at the gallery and beyond. Singing the World: The Dawn Chorus is the contribution from painter Mike Collier, who was inspired by birdsong heard early one May morning. The processes devised to move the sonograms to coloured paintings are complex and intriguing: even more fascinating is the complete set of neumatic notations filling one wall. Bennett Hogg's music accompanies the art. The LISTEN event continues in the Black Swan and various venues around town until September 1st - I'll be involved a talking-walk at the end of August, (and also have a presence on the 'Playlist' scheduled for Thursday July 25th, just before I head for the azure skies over Greece...) 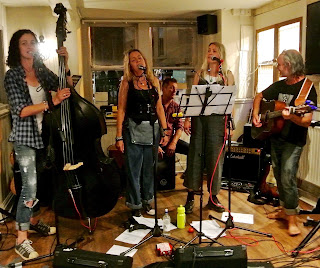 Only a small music section this week, as I didn't get to several gigs I'd intended to see. 'Bare to the Bones' reincarnated again at the Artisan on Friday, this time with four bands and several solo performers joining in: Hello Hopeville, The Decades and Hoodoos all enriched a regular mix that starts and ends with Paul Kirtley's famous jam sessions - totally unrehearsed, he always reminds us, and we believe him! It's a good fun night, and has so far raised around £3,000 for Paul's chosen cancer charity. Here's The Hoodoos, and a typical glimpse of our 'stage'... 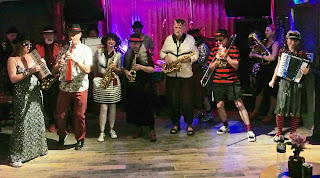 On Saturday night 23 Bath Street was overrun with percussion, as Frome Street Bandits gave a fabulously flamboyant demo of their urban gypsy / funky ska style:  this was followed by 25-strong Carnival Collective, but my functioning week ended at that point so no report on that, or the protest song event A Change is Gonna Come at BOV on Sunday as I had to forgo that too. Fingers crossed for return to health in time to travel to Skyros next weekend...