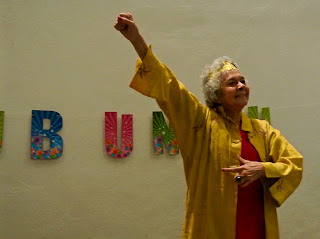 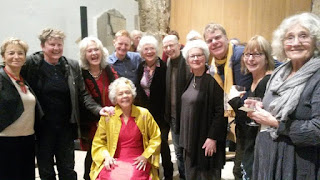 "I am because you are, and we are community - this is Ubuntu."
Hazel Carey's book 'Ubuntu - My life in Other People' is an amazing memoir of a lifetime of creativity through drama, dance and song, including spearheading the South African cultural renaissance in the 1980s. Ubuntu is an African term meaning 'we are who we are because of other people,' and as Hazel's friend for over twenty years, I was privileged to edit her story, learning in the process more about this fearless, free-spirited, inspirational woman.

Last week saw Hazel's book launch in London at St Ethelburga's Centre in Bishopsgate, with a party where scores of Hazel's colleagues and friends converged to celebrate, including a posse from Skyros sessions ~ here surrounding the queen of the scene in an impromtu photobombing opportunity. An unforgettably marvellous event, and a great day out in London too as I chose to make my way to the venue via South Bank to watch the city's twilight scenes turn into glamorous nightscapes of magical illuminations as the shard spiralled and sparkled over the dark water and bright-lit bridge arches.

Words & Ears, Bradford-on-Avon's monthly Poetry Cafe run by Dawn Gorman, is always enjoyable though I don't go as often as I'd like. This week I did, and was rewarded by an excellent evening with strong readings from guests Elizabeth Palmer and haiku master John Hawkhead from his collection Small Shadows published by Alba, and outstanding poetry on the open mic. Moods ranged from Chaucer Cameron's subtle and powerful protest at the censorship of Iranian poet Sepideh Jodeyri to Kate Escher's poem composed entirely of lipstick names, and it was great to hear favourite poets like Stephen Payne, Jinny Fisher and Dawn herself, as well as discovering new voices like Pey Oh Colborne. 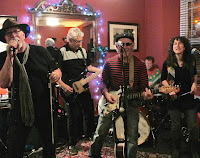 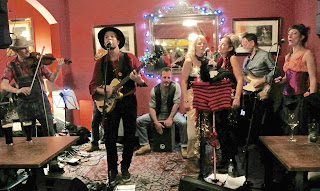 Back in Frome, it's been a sensational week for live music. The newly-rouged bar of The Cornerhouse was crammed on last two Saturday nights for fantastic bands: marvellous Captain Cactus and the Screaming Harlots (Jane, you broke my heart with that rendition of Just Somebody I Used to Know) and another must-dance-to band, Bristol's rootsy Flash Harry. 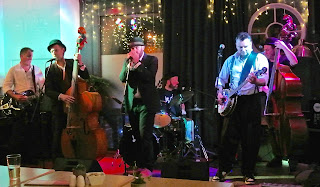 Back Wood Redeemers, another awesome band, treated us to their 'twisted blues & religious fervour' at Silk Mill last Sunday and then did it all over again, even better, at Grain Bar Roots Session on Wednesday with our Mr mayor astounding on mouth-organ.

And Bonne Nouvelle gave a sublime performance at the 'Friends of Frome Festival' party at the newly refurbished Granary venue, a fun event which confirmed the fact I'm rubbish at quizzes.

Final music note~  for me, though there's always more music in Frome than days in the week ~  Nunney Acoustic Cafe, featuring Emi McDade and with an excitingly eclectic open-mic including original songs along with covers of Undertones, Manics, Green Day, and Company of Thieves. I contributed three of me pomes which while not exactly child-friendly were at least not scurrilous, which neatly segues into the frankly self-indulgent footnote for this post (about which, as Jane Austen said of Emma, no-one but myself will care...) viz: that Amazon now has two reviews of my collection Crumbs from a Spinning World:
"... Funny, touching and beautiful collection. It is a rare book of poetry that takes you on so many journeys." "My favourite book of 2016. Crysse is a genius with words and these poems make me smile even on their umpteenth reading."  Thank you, lovely people, and for all the facebook comments and emails too.
Posted by Crysse at 8:11 PM