Slipping icily into the festive season... 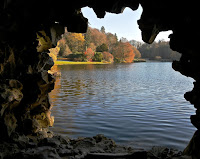 'The cold never bothered me anyway' trills Frozen's Elsa bravely. Don't mistake me for Elsa. As frost grips leaves (prettily) and windscreens (annoyingly) I strive to muster the stoic resilience of Albert Camus who wrote In the depth of winter, I finally learned that within me there lay an invincible summer. Good luck with that, then, my less stoic self mutters. But it's beautiful, I concede, that icy clarity of winter sunshine ~ this is how Stourhead looks when half the lake is solid and the grass is a field of tiny sabres. 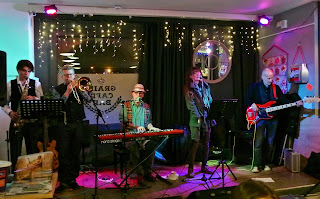 And now it's December there's no avoiding the beast that lurches toward Bethlehem to be born again as a Retail Festival. Frome had a low-key lights-switch-on event this year: singing in the streets and tree sparkles which all lit up at the right moment ~ the mass 'Ooh!' gasp in response was more of an Oh!' of surprise from Fromies familiar with such events.

There was plenty of good music & other stuff around too: Dexters Extra Breakfast after the festive market at the Grain Bar were followed by the foot-stopping Buffalo Gals, and on Sunday Jazz Jam at the Cornerhouse gave us Simon Sax's lineup of superb performers. And Cafe La Strada is now featuring an exhibition of David Goodman's characteristically lucent eclectic photographs. 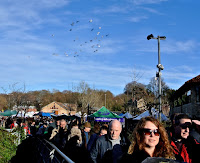 First Sunday of the month is Frome Independent market and minus- zero temperatures didn't stop the crowds pouring in. Cerulean skies and sunshine helped, and despite the whole town bordering on gridlock status (especially around hot-drink stalls) there was an upbeat atmosphere. 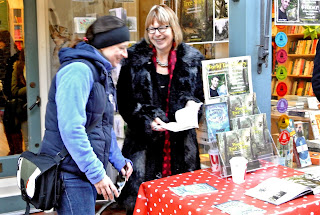 This month I was on the market myself, spasmodically declaiming poems from Crumbs from a Spinning World outside Hunting Raven Books, along with World Tree Story author Julian Hight who was also selling and signing. Great fun, and lovely feedback from buyers.

Earlier this week I'd met up with Burning Eye Books press officer ~ delightful Jenn Hart, here setting up for a podcast to give my progress report.

My idea is a kind of scatter-gun approach to launching, with pop-up events in various locations (Frome Library next Saturday, December 10) and open-mic performances in Poetry Cafes and clubs. "If it isn't any fun, don't do it" D.H.Lawrence said, and he was right.
So far, I've done spots at events in Bruton and Wells, acquiring after the latter a review in the Wells Journal I shall quote endlessly: Praise ... to Crysse Morrison, whose alphabetical 26 word review of Austen's Pride and Prejudice allied form and function in a way the Bauhaus would have applauded.  So it's a watch-this-space situation, or check my facebook page should you want to know upcoming.


Footnote of the week comes from a marvellous piece in Index: Wiltshire in which a Devises resident yearns fractiously for some of Frome's iconic charm. Oh, blast that funky freewheeling Frome... Here we go again, I swear every news story I hear about Frome is a happy-ending-tale of civic action...
...not a constant free festival or a hippy commune, Frome is an organised community acting upon issues, often against conformity, to create a distinctiveness and liberal attitude which makes Brighton look like North Korea. Full of facts, and funny too ~ Darren Worrow, you may not be Bauhaus but I enjoyed that very much.