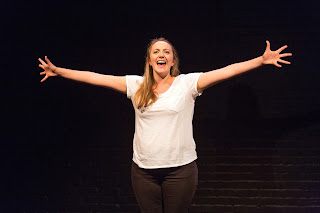 BIKE was on my must-see list for several reasons: a new play by southwest writer Katherine Mitchell, developed under the Original Drama programme at Salisbury Playhouse, staged in the exciting theatre space of the Salburg studio. If I watched more telly I'd have known to add that it's performed by Lucy Thackeray, who is simply marvellous as the girl: she can show every age from child to middle-age wearing the same teeshirt & leggings and convey a three-sided conversation with no more than a nanosecond to change from angry woman to wounded husband to irritatingly empathetic therapist. Her comic timing ~ this is definitely a comedy despite dark themes ~ is superb, and so is the synchronised sound and mood-enhancing lighting. She has some strong material in this tautly scripted monologue, which uses 'bike' as an image of independent travel, a slang sneer, and a symbol for structure in life. Like Fanny Hill, this girl narrates her chaotic life with a mix of joy, defiance, and pathos: left emotionally adrift by her family she discovers what anyone could have told her (well I could, anyway) that "Having sex feels a lot like being loved" and relationships are more difficult. Ultimately this is a morality tale, but the telling is fast and funny. It's on till 17th October, recommended. 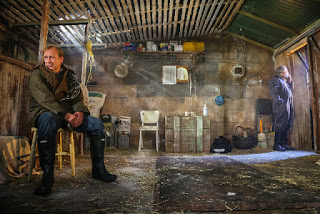 Also on till 17th October, and top tip from The Guardian, Bristol Old Vic studio theatre is showing And Then Come The Nightjars.  'The bloodbath of the foot-and-mouth crisis' (also the funeral pyre of ten million cows) didn't sound an appealing theme, but the play was developed through Bristol Old Vic Ferment and written by southwest writer Bea Roberts and according to the buzz on the dramatic street this is also a don't-miss, so I went, and the buzz is right. It's immensely moving to see that mass slaughter from the intimate perspective of this story of a friendship and a farm that survives against all odds. David Fielder is utterly convincing as Michael the solitary farmer, with Nigel Hastings as Jeff the vet who helps him with calving and comes again to kill the herd in a scene that evokes not only England 2001 but also scenarios the world over where powerless individuals face state control. "They're not sick." - "It doesn't matter. They just put rings on the map." - "But this is my farm!" - "They've called out the army, you'll be arrested and they'll come in anyway." Tight powerful writing, in places very funny as times change and the barn becomes a potential asset. "It's a cow-house, not a spa!" Michael spits, but Jeff is right about land being 'real estate' now (Babbington House cowshed 'Cowgroom' treatments start at £80 for an eyebrow tidy) and the play ends with rapport between the two men, even an awkward though warm bromance. Strong acting, atmospheric set and lighting, highly recommended.  (image Jack Sain)
And great to see two talented women writers supported by local initiatives to develop their scripts to this standard ~ big thumbs up to Bristol Old Vic and Salisbury Playhouse. 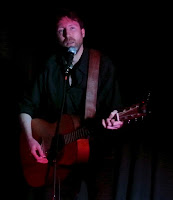 Finally this week, Jon Amor at the Grain Bar Roots session, with a fabulous double set. Here's a sample:
The Rules  and Just Another Stitch In Your Party Dress, dedicated to tiger-girls and cougar-women everywhere.
Posted by Crysse at 12:59 PM