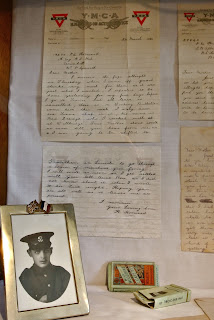 When I was growing up my mother told me I was born in an air raid ~ I've checked date & location online and it's true, the bomb devastated nearby Vauxhall ~ but nothing more of that war was ever spoken of, either at school or at home. My father was a young man in the one before it, the Great War, but was deemed delicate so immune from service. The night before he died he broke a silence on the subject that had lasted all my life: "Before the war," he said, "I had three friends. By the end of the war I had none."  So these current WWI reflections, or 'celebrations' as our leaders like to call them, have a particular poignancy for me, as it was too late then to fill in the missing history of loss & grief or to console for his long years of quiet desperation. And after the political cynicism at the start of this centenary year I didn't expect to see anything as affecting as Anthem for Doomed Youth at the Imperial War Museum twelve years ago, but Frome On The Frontline at our town museum has come up with an exhibition that's informative, child-friendly, and deeply moving too. Especially touching is the case-study of local lad Harry Horwood, whose polite, affectionate, letters to his mother are displayed along with his photo and fags and other effects including the commemoration given his relatives in recognition of their sad bereavement...  This temporary exhibition is on throughout August, do go if you're around in Frome even if you think you're sick of 1914 ~ you can make your own medal and have your picture taken in a Red Cross Nurse's outfit too. 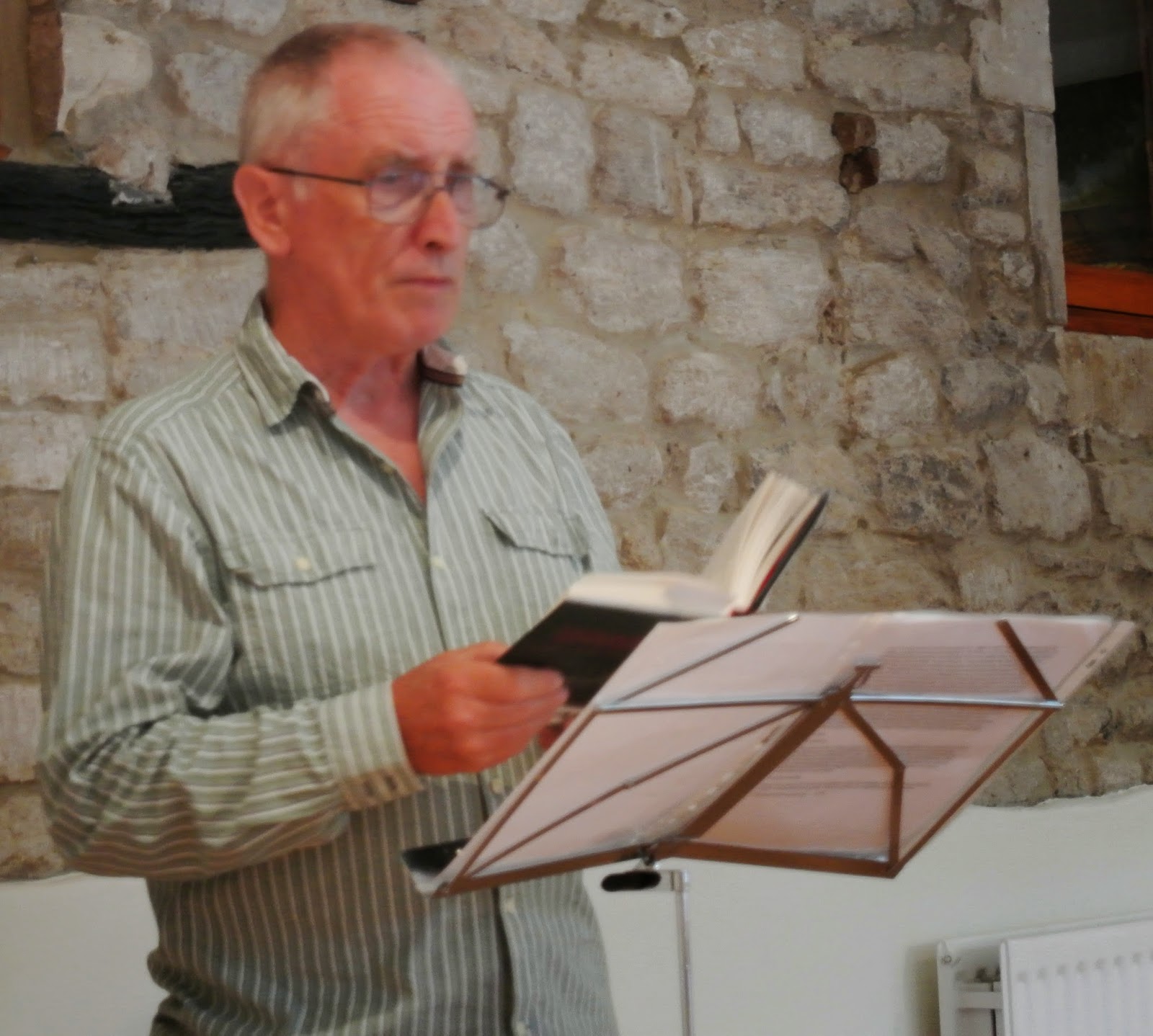 Words & Ears poetry cafe had a memorial event led by Peter Wyton whose poem Unmentioned in Despatches is in the new edition of the New Oxford Book of War Poetry. Not a funny night, as Peter warned us, but with some profoundly moving individual tributes as well as many shared personal favourites ~ my contribution was Roger McGough's On Picnics, which says so much so simply. Peter read a selection from the anthology in his idiosyncratic style a long way from hype & hyperbole: Wilfred Owen, he told us, 'had a particularly horrid time' before dying so close to the armistice that bells were tolling in celebration when the news reached his home village. Dawn Gorman, who runs and comperes this excellent Bradford-on-Avon event, read an extract from All Quiet on the Western Front still tragically topical:  “I am young, I am twenty years old; yet I know nothing of life but despair, death, fear, and fatuous superficiality cast over an abyss of sorrow. I see how peoples are set against one another, and in silence, unknowingly, foolishly, obediently, innocently slay one another.”   Also especially touching was Richard Carder's sharing of Ivor Gurney's short reflection on mortality The Songs I Had and Alan Summer's lucent haiku: The grass grows dark / a lamentation of swans / shape my world. As Dawn says, we are the products of survival so this is not morbidity but a celebration of life. 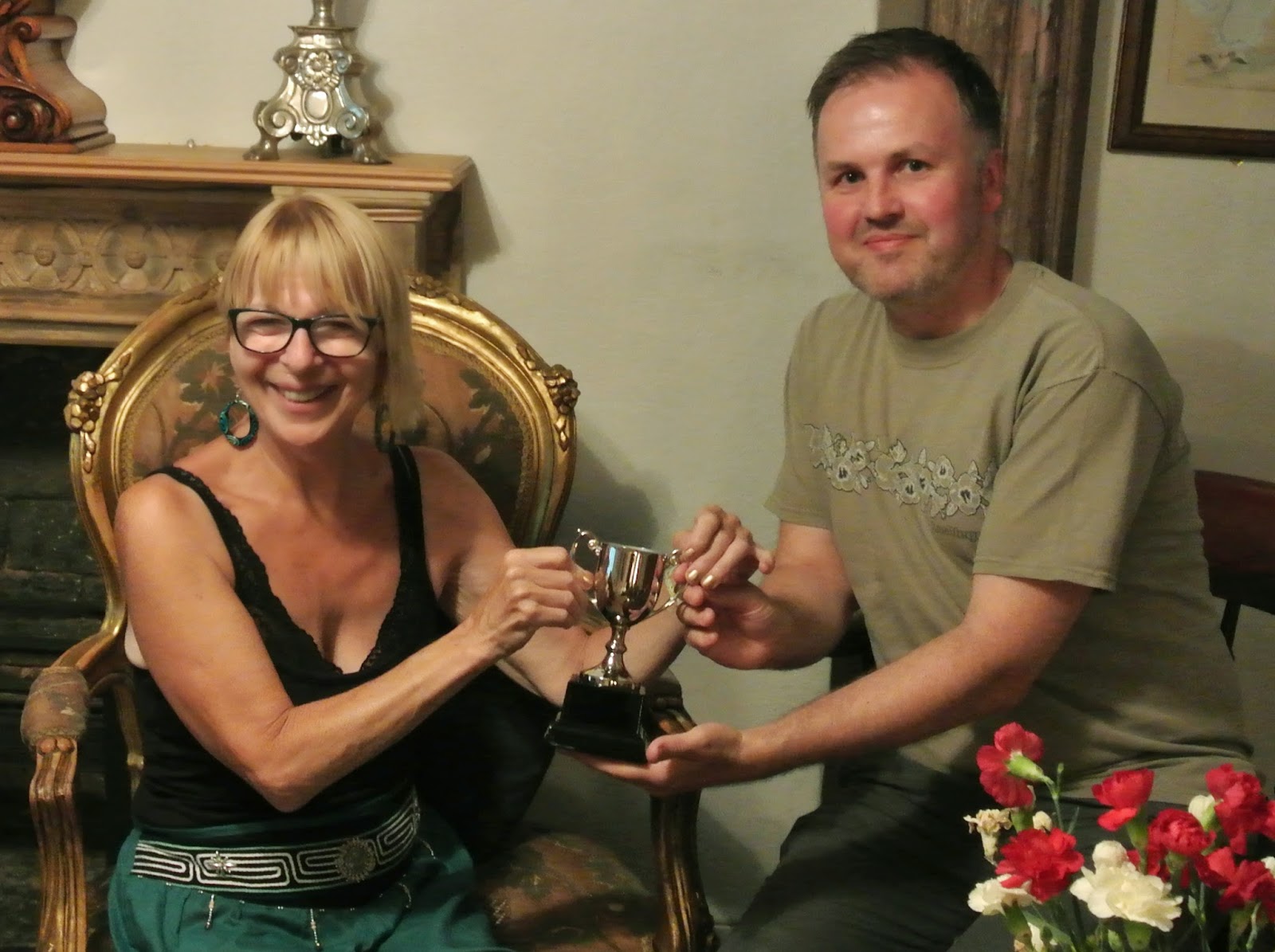 And so much to celebrate this summer! Like, a fabulous fortnight of festivities with family and friends for my Big Birthday celebrations (you can check how big from the opening line of this post if you don't know from facebook) and an exciting sequel to my winning the title Bard of Frome in a public stage-off during Frome Festival: Muffin Man will be performed again as curtain-raiser to the Nevertheless autumn production in October with hot-property actors Ross Scott and Fleur Hanby-Holmes ~ full details still under wraps but to be revealed soon...
Posted by Crysse at 2:54 PM