I discovered this last night at Bath's tasty little Rondo Theatre where director Ian McGlynn had the best launch idea yet: a party, with entertainment from the Music is Life team whose new show Pencoweth has its première at the end of the month, and a taster from Living Spit's marvellous show The Six Wives of Henry VIII which you can, and should, see in full in October. 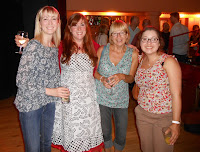 Rondo has a policy of dovetailing professional touring shows with community theatre, and  encouraging new writing too. "We punch above our weight for a 150-seater," says Ian, "people come because they love the place, the welcome, and the view." I'm not quite sure about the view is, but it looks good tonight: here's Rosie Finnegan with Stu McLoughlin and Howard Coggins, attempting to net Living Spit for next summer's festival, me with Shane and Ian, and with Annette Chown, Alison Farina and Laura Jane Faultley.

Nevertheless Pub Theatre is looking forward to autumn, too: Rosie and I are bringing the Stepping Out production of Gogol's Diary of A Madman to The Cornerhouse next month, so put October 11th & 12th in your diary if you live anywhere near Frome and fancy quality professional theatre for less than the cost of a couple of drinks.  More on this later...
... in the meantime, Poetry Cafe night on Monday September 23rd at Frome's Garden Café should be amazing, with Rose Flint and Graham Hartill guests as well as open-mic.  Autumn Equinox feels like a time between times, summer behind us and Samhain approaching, a great time for poets to reflect on Life, Death and In Between...

In the meantime too, I'm off for a final week of sunshine ~ leading my writing course in lovely Cortijo Romero in Andalucia.