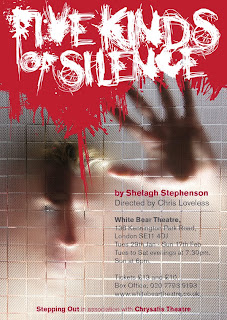 Bristol-based Stepping Out Theatre Company's current production opened in London at the White Bear Theatre Kennington. Five Kinds of Silence has won two awards for writer Shelagh Stephenson and it's easy to see why: the story is heinous but the script glitters, lyrical and laconic by turn, and with startling dark humour from the opening moment when Susan and Janet shoot their father while their mother whimpers 'I should have done that.'  From this point we follow the fall-out as years of normalised abuse are peeled back to show what happens when two traumatised children grow up and meet and marry, and then there are two more children... 'We're just a case history' says Janet, learning the vocabulary of 'feeling' that will pacify baffled professionals, but to both girls words like vulnerable are useless. 'You just survive,' says Susan, 'You don’t tell anyone. Because it’s private.' These curt interviews are interspersed with richer imagery in their personal monologues ~ especially Billy, who recalls the night he met Mary: 'The world is black and cold but I’m taking her with me. She smiles. It’s better than killing the cat. Though somehow that’s muddled in too.' Billy is an immensely complex man as well as the savage dog of his dreams, and his daughters loved him ~ though as Janet says, it's sad he wasn't nicer so they wouldn't have to kill him.
This is a play that could be too harrowing to watch easily, but director Chris Loveless and a stunning cast have created a totally gripping piece of theatre which, while deeply moving, allows us to engage with compassion and even with hope. The relationship between the two daughters, superbly played with sensitive restraint by Violet Ryder and Olivia Dennis, is tender and truthful, and Zach Lee as Billy can change from beautiful to monstrous in a moment and is always charismatic. This extraordinary production runs to February 17th ~ it had pin-drop attention and passionate applause from the full-house first-night audience so if you're anywhere near London, book while you can.

A city break is a chance for theatre both on- and off- West End, and Privates on Parade is on, at the Noel Coward Theatre.  Filthy innuendo, men in frocks frolicking, what's not to like? I thought, and the show is indeed mostly hilarious froth & camp bubble but with with a rock of hard reality there below: the blundering folly of our 1940s conflict in Malaya ~ and war generally ~ and the crass racism & homophobia of the ruling classes who decreed & directed it. Hugely entertaining, with great performances from Simon Russell Beale as an endearing poof and Angus Wright as an obtuse god-bothering Major General. 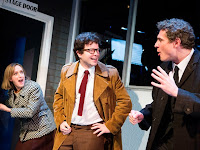 Then to Southwark to the delightful little Chocolate Factory to see Sondheim's Merrily We Roll Along, another musical revival of a zesty show with a spike at the heart:  no deaths in this but a personal tragedy of wasted talent as musician Franklin Shepard ~ Mark Umbers is mesmeric in the role ~ looks back over a supernova-success story that's destroyed every relationship he valued. What's most poignant about this salutary fable of the relationship between art and money is that the timeline is in reverse, so we see with dreadful hindsight how every misjudgment and weak-willed trade-off has led irrevocably to the burnout of his real happiness. The production won Critics Circle Theatre Award and now even the extended run has sold out.

And finally before I leave London ~ though we have now actually, on the noisy late train from Paddington ~  a big-up to The Refinery where we had a fabulous supper presented all posh in a restaurant so lovely even the loo deserves special mention.
Posted by Crysse at 2:30 PM

Email ThisBlogThis!Share to TwitterShare to FacebookShare to Pinterest
Labels: Five Kinds of Silence, Merrily We Roll Along, Privates on Parade