Back in Frome after Steptoe & Son for another retro tale of social misfits as Miracle Theatre bring Frankenstein! to Merlin theatre. This version is set in 1947 and ostensibly devised and performed by the Ffitch Repertory Players, allowing Ben Dyson to entertain us with his droll, clipped, absurd-chap voice as well as spoof BBC newsreel film about cryogenics and Housewives Choice theme music during monster-making. 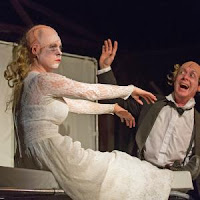 Frank(enstein) in this tale is a nerdy boffin who arrives at the Eternal Life Cryogenic Institute in time to hear its director announce he's "made an awful bish of things" and the bankrupt business is literally in meltdown with all its famous frozen clients rapidly defrosting. When Dr Schwindler lives up to his name and dashes off with the filched cash, his daughter Elizabeth helps Frank snatch a selection of prime parts ~ the brain of Noel Coward is one ~ to create a composite of assets and, using a very sharp knife, to split an atom and toaster-jumpstart their creation into life. Alas, prejudice against stitched-up monsters who talk like Noel Coward blights his new life. Like Steptoe he longs for a mate but the frozen hearts are now all thawed, though Elizabeth has a nice one... and thus only one human character survives for the final showdown in Patagonia, a struggle of worthy of Holmes and Moriarty which is appropriately ended by an avalanche. Flash forward to the future, and three deep-frozen bodies have been discovered and are about to be revived...
Miracle offer reliably accessible entertainment and are always popular with audiences, but this one for me is overlong and relies too much on the confidence of a clever cast. I've followed this company for years and seen them ignite classic scripts with insight & compassion as well as their trademark humour ~ their outrageous Shrew and passionate Romeo and Juliet were to me what Miracle did best ~ and I'd love to see a revival of their vintage style. 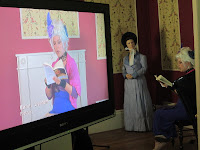 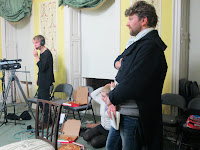 How did you celebrate the 200th birthday of Pride and Prejudice on Monday? You probably merely mused aloud on universal truths about single man with good fortunes. The Jane Austen Centre in Bath marked this epic bicentenary with a reading of the entire novel, streamed online throughout the day. "We're up to chapter 39 - we've just gone live to Arizona" said Readathon organiser David Lassman when Rosie and I arrived with Muriel Lavender in the evening for our designated chapters. Our bit was around the fallout from flighty Lydia running off with Wickham so it was more like Folly and Furore, with emotions running high and great dialogue. We mingled with the other actors and watched Bath University Media Productions student team sorting the technicals as David heroically held the event together for over fifteen hours ~ I tuned into the live link at 3am and there was still one chapter to go, with the social stream still feeding in appreciative comments from around the world. A great idea and fabulous fun to participate: big appreciation to the whole team, including Wendy and Lenca who kept the Green Room supplied with coffee and sandwiches while we played with the period costumes and waited our turns. When's the next bicentenary?
Posted by Crysse at 10:00 AM