Hunting Raven, Frome's popular independent bookshop took an enterprising leaf out of Bath's bookshops on Sunday, with a reading by art historian, poet & novelist Sue Hubbard from her latest book The Girl in White. 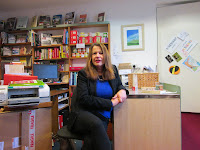 This fictionalised biography tells the fascinating story of Paula Modersohn-Becker, late 19th Century German expressionist painter and intimate of Rilke who wrote Requiem for a Friend after her early death after childbirth.
Don’t be afraid if I understand now, ah,
it climbs in me: I can do no other,
I must understand, even if I die of it.
Part of the fascination around Paula's life is the nonconformist spirit she showed in both her painting and her lifestyle ~ she joined a bohemian artists' colony and after her death was officially labelled a degenerate. Sue researched so exhaustively she claims she "sometimes felt like the puppy in the Andrex ad, all this stuff unwinding, how do you get to the end and find a form?"  Her answer was to write from the later perspective of her daughter Mathilde who, since she never knew her mother, is also researching Paula's story.
Hunting Raven will be open every Sunday till Christmas ~ an ideal opportunity to browse and buy without supporting grand-scale tax evasion. And while I'm beating the drum for local independents, Raves from the Grave is rated "music heaven" and Ellenbray Press has toys to make you giddy ~ you could restructure the town centre in Lego. 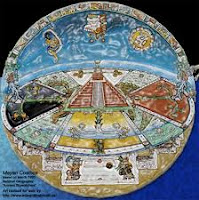 Moving randomly on, today's date is my chance to share a wonderful Erich Fromm quote I found posted on facebook (thanks Charty): “Love is the only sane and satisfactory answer to the problem of human existence”.  The Ancient Mayan calendar apparently regards 12-12-12 as the beginning of a new cycle of evolution for humanity and the cosmos, heralding a momentous shift in the collective consciousness of the planet. I look forward to it wistfully.  Eric Fromm's words reminded me of that sensational Auden line "We must love one another or die" which I've now discovered (thanks Steve) the poet himself later rued as shamefully sentimental. He withdrew the poem from his collections and refused further permission to use it, but I'm far from alone in feeling huge resonance in the elegant magnificence of this laconic line: E M Forster in his political essays wrote of Auden "Because he once wrote 'We must love one another or die' he can command me to follow him", and the injunction remains in popular culture as an aspiration even if not a truth universally acknowledged. Auden is possibly my favourite poet so I'm baffled he recoiled so violently, and wonder if it was precisely that ~ recoil, like the kickback from a powerful gun connecting with irrevocable impact. So that's my message at 12am on 12/12/12: numbers come & go, but never underestimate the power of words. Happy New Cosmic Shift!
Posted by Crysse at 12:00 AM