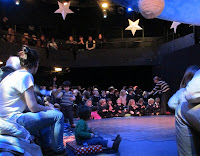 Hey Diddle Diddle at Bristol Old Vic is billed for ages 3-6 and delivers exactly what it says on the tin: nursery-rhyme-based entertainment to delight children up to first year at school, though probably not far beyond. A lively trio of performers ~ Isabelle Cressy especially awesome ~ used music and physical theatricality to create a story blending naughtiness with magic. It’s a timeless formula for success with this age group, and the adoring row of tiny watchers was a show in itself. There’s useful tips for parents in the replicability of aspects like simple shadow play, instruments created from trays and plates and tubes, with dressing-up-box costumes & homemade-looking military hats, but the undoubted highlight is the don’t-try-this-at-home-kids! sequence of Incey Wincey Spider’s balletic web-climb to dizzy heights. My only reservation about this simple and lovely show was the book-ending sections establishing roles and relationships for the three ‘children’ which seemed unnecessary wordage for such inventive performers.

Over the other side of the river Tobacco Factory has collaborated with NIE with a new production of Hansel and Gretel. Typically for this amazing company there’s inventive musicality and huge gusto as they tackle a particularly grim Grimm’s fairytale summed up by director Alex Byrne as "cruel and delicious ~ a tale of famine and cannibalism, bravery and to some extent redemption.” To a limited extent I'd add ~ as acknowledged by the children when their journey is near completion with witch slain and jewels claimed: “Hansel, does that mean we are now at peace?” “Do you mean as well as murderers?” responds her brother...  Mindful of the 'nasty and scary' aspects, the company uses puppets and humour in their storytelling, with helpful reminders like “This was a long time ago, please don’t be too concerned, this might not happen to you.” But worse than the roly-poly witch who gloats I just really like eating children. Is it so wrong? is the domestic abuse in the family Hansel and Gretel leave behind, with a mother introduced as “a kind of Jungian archetype.” After succumbing to another vicious tirade and agreeing to abandon his children in the forest, Father appeals for audience support, and the ensuing shocked silence makes us all culpable witnesses.  And that early hint might also invite reflection that Jung's interpretation of this story as an essential journey to adulthood includes too the notion that the terrible taboo of child-eating represents persecution of minorities, with the symbol of the oven especially gruesome in this Germanic tale. Dark material indeed, but the music is uplifting, the playfulness with puppets is beautiful, and the multi-cultural cast all terrific. And there's a magical ending as snow slowly descends all around. 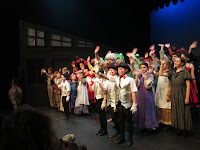 Third Christmas production this weekend in family-show terms is the Goldilocks planet: Pinocchio at Frome's Merlin was a hit right across the age-range, from tinies to grannies. Directed by Philip de Glanville for Merlin Theatre Company, this warm-hearted slightly wacky story was full of delights and surprises, notably the superb puppet-show scene. I specially loved Laurie Parnell's Puppet Master, Ryan Hughes as the Singing Cricket and Tina Waller in the title role, but there were lots of great cameos and ensemble moments in this hugely successful community production.

Finally... Do you trust this government ~ or any future government ~ never to use legislation based on the Leveson report beyond its intended aim of curbing press intrusion? 86% of those surveyed for English PEN don't, and frankly nor do I. As PEN campaigns coordinator Robert Sharp points out, Leveson's considerations focused on larger publishers such as national and regional press and magazines... and given the way news is now disseminated with bloggers and citizen journalists, it is important to consider the position of individuals and small publishers in any legal or regulatory regimes. PEN is the Amnesty of writers across the world, so when this organisation joins forces with Liberty to oppose compulsory statutory regulation in the interests of free speech, I think we should listen to their views. While we still can.
Posted by Crysse at 11:40 PM