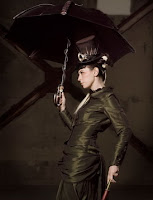 No Dickens character is ever ordinary. They are macabre, valiant, odious, saintly or brutal ~ victims or bullies in a vivid people-scape with no pallid shades, and thus ideal for Red Dog. This Stroud-based theatre company specialises in text-based plays with big immediate impact and is currently touring Dombey and Son which came to Bristol's Tobacco Factory last week. From the opening moment of the play ~ the explosive birth of Dombey’s son ~ colourful characters ricochet around like a fairground waltzer to create a salutory tale: the destructive power of greed and the redeeming power of love. Six superbly skilled actors created between them two dozen characters, some by poignant puppetry, some by extraordinarily absurd costume, and the city was convincingly contrived by stepladders and crates. With humour and pathos by the bucketload, this was the most emotionally moving theatrical experience I've had all year. 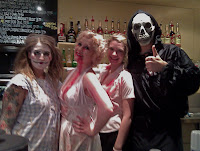 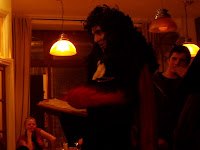 And now it's Samhein, the most important festival on our calendar, a magically potent time we call also Halloween when La Strada staff serve customers with not so much a smile as a bloody grimace. In the Cornerhouse, John Law's jazz session was interrupted by ghosts from 1685 as a vampiric Judge Jeffries strode in to harangue and finally hang a youth from Frome unjustly accused of supporting the rebel Duke of Monmouth... a powerful cameo penned by Frome Scriptwriter Eddie Young, and sadly based on truth. Twelve men of Frome were hanged right outside where the pub now stands, the road still called Gorehedge because of blood spilt there in the Orange Rebellion. Although another website throws doubt on this grim etymology, explaining that gore is an ancient name for a triangular field. Phew.
And well done Eddie, Jake Hight and hanging judge Howard Vause.
Posted by Crysse at 12:54 AM