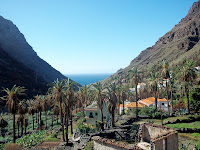 "Be ready for the Apocalypse" our neighbour announced when Steve and I arrived at our holiday apartment in Valle Gran Rey at La Gomera, littlest of the Canary Islands, expecting a relaxing break of sunshine and strolls. And Goyo did have a point. This idyllic environment of rustling palms and gardens of fruit trees and blossom was shockingly devastated: the fires that started during a tinder-dry August this year had smouldered on till the end of September. Hundreds of families were evacuated, scores of houses burned, and scorched trees and razed small-holdings all the way up the long ravine told of tragedy and terror. Even in the heart of the island, the primeval forests of Garajonay looked in some parts more like a war zone than a National Park. It felt like we'd come to a place that rain had forgotten.
The next day the storm broke. The skies exploded in the same hour the front tyre on our hire car exploded, which would have been tricky except that extraordinarily fortuitously we were right outside the only garage on that mountain road. We decided to abort our planned walk, which was also fortuitous as most of it fell down the mountain that day, and we arrived home to find our road a lake and our path a waterfall. Goyo was jubilent: four years of dearth ended and all would be beautiful again, he said ~ and it certainly was awesome to see fresh verdancy unfolding daily. 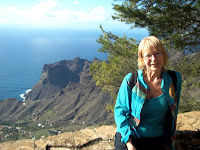 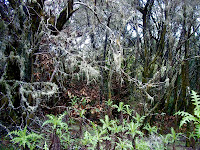 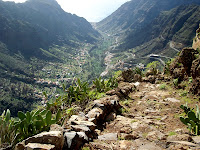 Apart from Garajonay and the small townships most of La Gomera is ancient rock, which survives impassively in extraordinary formations from Jurassic times. We walked each day for hours: along coastal paths where blue skies merged with blue seas far below, on forest trails where twisted branches were frosted with long fronds of moss and lichen like witches hair, and on one memorable day we walked 800 metres above sea level on a stone path so steep I sometimes had to go on all fours like a spider-monkey. This was another occasion when, as on puncture day, it seemed the Goddess of La Gomera was looking out for us: we arrived eventually exhilarated but exhausted at Las Hayas to realise it had neither welcoming bar nor taxi option - but it did have a friendly-looking couple in a hire car just about to set off. They gave us a lift all the way back to Valle Gran Rey, negotiating the descent with exclamations of awe while we stared out murmuring near-disbelievingly We climbed all that... we must have been crazy.
We didn't just hike, of course. Valle Gran Rey with its hippy vibe & relaxed bohemian ambience isn't touristy at all by Tenerife standards but we found some nice cafes and restaurants down by the beaches. A favourite was El Mirador overlooking the bay, rightly proud of its fresh local produce. 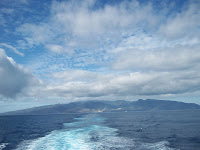 And now our mythic journey is over, and I'm home again.
Great to arrive to good news from previous writing course participants: Teddy Goldstein's book Toxic Distortions has won the 2012 USA Best Book Award for Historical Fiction e-Books, and Cliff Lonsdale, initially inspired in September on Skyros, is celebrating his writer's journey with an excellent blog. Congratulations guys, and thanks for the appreciation but commitment and practice is all that really matters ~ which is why now I need to get back to writing...
Posted by Crysse at 9:30 PM