Having ridden down Highway 1 on the back of a 1200 BMW I was keen to see Take Me With You at the Brewery when I read this "poignant, funny and heartbreaking story of three dreamers adrift" is located around the Pacific Coast highway. Writer Godfrey Hamilton creates a passionate, sometimes lyrical, evocation of the fragility of the American dream. Happiness is going home to a dog, declares the 'big old queen' after participating in a bizarre freeway canine rescue. It certainly isn't going home to a God for the disenchanted evangelist preacher who recalls with unhappy irony trying to drive the devil out of a gay man in his congregation. Actors Mark Pinkosh and Ross Bautsch deliver their stories in separate monologues, intensifying the aura of loneliness around these solitary lives. At 70 minutes it's slightly overlong but the bit about the dog is very funny. 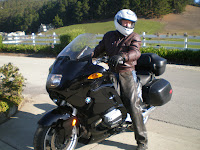 I can't find an image on either Starving Artists Theatre Company or Tobacco Factory site that looks like the show so I've posted the bike I rode on instead. Nice memory! 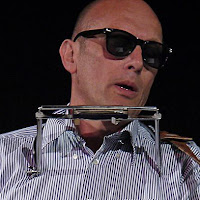 Bath's Mission, originally a chapel and recently rescued from dilapidated decline by the enthusiasm and enterprise of Next Stage Theatre Company, hosts a medley of dramatic events including this week Shakespeare Rattle & Roll, devised & performed by musician/actor Martin Dimery. Martin's better known as the John in Sgt Pepper's Only Dart Board Band and as director of Frome Festival but he was in another incarnation a teacher, and this performance uses the conceit that the audience is a class in detention and required to study the musical influences of the plays and sonnets ~ an effective introduction to an hour that does indeed inform as well as entertaining. With references ranging from Spenserian iambic pentameter and Schubert to rap and vaudeville, Martin re-envisaged songs, speeches, and sonnets in musical styles including Elvis, Marley, Johnny Rotten, Buddy Holly, Roy Orbison, and George Fornby ~ with a few famous speeches in the manner of Olivier and Frankie Howard... Witty parody combined with fascinating insights into the bard's life & work from a performer impressive in his own right, and the audience stamped mosh pit style in approval.

Here's a 10-second challenge for all you writers ~ complete this sentence: "The world is ______, _____, and _______." That's Duncan (Monster) Macmillan's opener to an excellent playwriting workshop at Bristol Old Vic on Saturday aimed at encouraging and supporting entrants to the Bruntwood competition. In two-and-a-half hours Duncan fed us a smörgåsbord of structural information on narrative arcs, hero's journeys and disrupted rituals, lavishly garnished with fascinating quotes: "Tell a story and the themes will take care of themselves" ~ Anthony Neilson, and my favourite from Brian Friel, "Writing a play is like stalking an invisible animal." 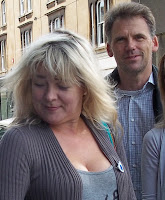 Rosie Finnegan and I took copious notes and then dashed off to the Alma Tavern where my short play Park & Ride has now gone into rehearsal. I'm thrilled that Alison Comley of Theatre West will be directing, and delighted too with my cast, a reunion from Consulting with Chekhov in 2010 ~ Dee Sadler and Dan Maxwell, already luminously lifting my script off the page. 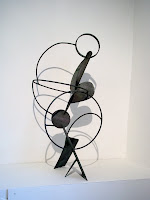 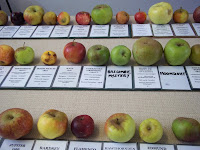 Back home it's Apple Day, the kind of event Frome loves to celebrate with live music & dance ~ circle dance, in fact ~ stalls of home-made bags and tubs of bubbles, cups of tea and plates of cakes. And apples, rows of them, with wonderful names like Golden Spire, Cornish Aromatic, Barnack Orange, and Wolf River.
Great names too ~ Gyrate, Gesture, Gymnastic ~ in Marian Bruce's contemporary art gallery The Parlour, where Alex Relph is exhibiting some amazing pieces of steel sculpture.
And finally... did you do the sentence? Your instinctive response is actually about your own writing. I chose The world is precarious, dangerous, and irresistible... point proven!
Posted by Crysse at 11:30 PM

Email ThisBlogThis!Share to TwitterShare to FacebookShare to Pinterest
Labels: Bruntwood, Park and Ride, Shakespeare Rattle and Roll, Take Me With You