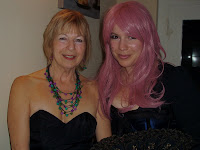 Burlesque night at Frome Poetry Cafe had April Follies as our theme and lovely Muriel Lavender our hugely popular guest. The Garden Cafe was completely crammed to watch Muriel in frilly bloomers declaiming her satirical gems, all in the best possible taste and accompanied by props from Dolly Parton hat to W.I. knitted knockers. For anyone who can't wait till Frome Festival in July for another dose of Lavender linctus and glimpse of gusset, Muriel is performing at The Bell in Rode next Thursday (14th).

One Flew Over the Cuckoo's Nest, written and set in the 1960s, has dated in the same way Shakespeare's tragedies have: we may thank our stars things like that don't happen nowadays, but we know human nature hasn't really changed. It's a brutal story of institutionalised bullying that culminates in suicide and murder, but nevertheless manages to end on an exuberant high that a broken but indomitable spirit can survive oppression with just a little help. The help, of course, is R P McMurphy, a reprobate who acts crazy to get out of the Work Farm, and opens the eyes of Nurse Ratched's 'boys' to her tactics of psychological abuse in the name of therapy. It's a play that needs a strong male lead, and Frome Drama Club found one in Stephen Scammell whose charisma electrified the entire action. The crazies were all terrific, each actor inhabiting his role totally at every moment, and the scene when they defy their tormenter to watch the World Series on a switched-off television is fantastic. (Thanks Mike Witt for the picture) Also unforgettable is the party scene that precipitates a tragic climax. Director Calum Grant, who also designed the effective set, comments in his programme notes that the fishing trip in the Jack Nicholson movie can't be shown in a stage version, but for me the containment within the men's ward is what builds the claustrophobic atmosphere to inescapable climax. A full house at the Merlin gasped, laughed, cried, and gave this brilliant production prolonged and well-deserved applause.
..
Posted by Crysse at 11:30 PM

Email ThisBlogThis!Share to TwitterShare to FacebookShare to Pinterest
Labels: Muriel Lavender, One Flew over the Cuckoo's Nest, The Merlin