A funny thing about The Comedy of Errors is that it's not the slightest bit amusing for any of the characters, who become progressively more irate, berated, and beleaguered: it's the privileged information of the audience alone that turns the action into hilarious farce. The premise is beyond absurd, combining extreme mistaken identity with bizarre coincidence, but this wonderful production energetically trounces any such nitpicking cavils.

Pay full attention to the opening speech though, because without this nothing makes sense: Egeon, a merchant of Syracuse, explains he is seeking his son who, with his faithful manservant, is seeking his identical twin brother and his identical twin faithful manservant. Little does Egeon know that they're all now in Ephesus, busily mistaking each other’s identity all over town.
Andrew Hilton's inspired direction shows this early Shakespeare play is ideal for in-the-round production: minimal set details give plenty of space for physical action and the story cracks along at a spanking pace. 19th Century costumes (designed by Harriet de Winton) not only look fabulous but subtly underline the brutality below the surface of an elegant era. Comic timing throughout is superb - some moments so funny they sparked spontaneous applause. All the actors are terrific so it seems wrong to pick out individuals but I will: Antipholus of Ephesus and his passionate wife (Matthew Thomas and Dorothea Myer-Bennett), Angelo the baffled goldsmith (Alan Coveney), and the mistreated menservants (Richard Neale and Gareth Kennerley). Both sets of twins looked uncannily alike, which really helps too. Oh, and so does the live music. This is SATTF on five-star form and it's on till the end of April, then transferring to the Northcott Theatre Exeter, so GO SEE! 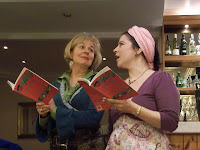 Anyone seeking the full corset experience should come to Frome Poetry Cafe next week, when Muriel will be the star of our Burlesque night.
Posted by Crysse at 6:30 PM