Voices in the City is the collective name for spoken word in Bath Literature Festival, or as they put it: 'poetical events', since Bath is a city because it has a cathedral, rather than urban eclectic energy.

The poetical event in the Central Library from 10am to 4.30pm last Friday, meticulously organised by Sue Boyle, provided readings ranging from Greek myths to Eliot's Wasteland, free to anyone with time to spare. I was a brief drop-in, but managed to catch a superb set by BlueGate Poets from Swindon. Travellers without Baggage is the name of an anthology they have been working from, and their presentation combined some of the original poems by Valerie Clarke with their own responses and was both lyrical and moving.

Paul - the new movie-genre spoof from Simon Pegg and Nick Frost, if you've been distracted by Baftamania and the name doesn't ring a bell - is not getting many stars from broadsheet reviewers who find its sci-fi geekiness not as funny as zombies or rural cops. Over in the states there's a different concern: the miraculously-healed bible-belt babe, liberated into extreme expletives and intention to fornicate, apparently introduces 'a risque series of attacks on Christianity that will be unpopular.' (Paul: “My existence doesn’t necessarily disprove religion, just all Judaeo-Christian denominations.”) I loved it, although most of the sci-fi filmic in-jokes went over my head, because the story is rich in other gags too: it's a bonding-style love story, a thriller, a nerds-triumph story and most of all a road movie, with lashings of self-discovery along the way. Why it's Little Miss Sunshine but with a kindof benign supersmart skinny Gollum on board. 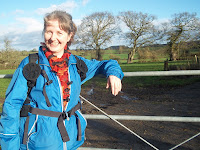 Back in the day when I strutted my performance poetry stuff about a bit, Hazel Stewart and I were Live & Lippy - and before that, with wonderful guitarist Laurie Parnell, we were Liquid Jam. In fact some of our words are still knocking around Youtube (onomatopoeia had 6260 hits last time I looked.) Hazel now lives in Cumbria so duets are off the menu, but when she journeys south we always meet up for walking and writing and talking of past times. This weekend we had another reminiscence-fest, looking back on our 'artist date' city-breaks in Paris, Amsterdam, Barcelona, and New York.... must be time for another, Haz!
Posted by Crysse at 9:41 AM

Email ThisBlogThis!Share to TwitterShare to FacebookShare to Pinterest
Labels: Live and Lippy, Paul, Voices in the City

Crysee
thanks for the complimentary words about our Travellers Without Baggage
Fondest
John.

Dear Crysse,
Isn't the cyber grape-vine amazing. I am a member of the BlueGate Poets who performed in the Travellers Without Baggage Set. Thank you for your enjoyment and general bigging up of the piece. We are performing again in the Cheltenham Lit Fest and - in our home town - for the Swindon Lit Fest.

Would it be OK to reproduce your blog on my own website http://www.a-spiritual-journey-of-healing.com?

No problems if not.

Poetry in the South West really seems to be thriving, doesn't it.

With thanks and best wishes,
Katherine