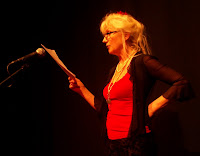 StageWrite Café presents... DRESSING UP BOX at the Merlin, last Thursday, was a more-than-sellout success, as our bistro-style seating onstage spilled into several rows of the auditorium - a fantastic tribute to the twelve wonderful writers who workshopped their creative imaginings and memories into a vivid and varied performance night.

Huge appreciation to everyone involved, especially Howard for our visual effects as well as performing, and Niamh for the technique tips - ooh I feel a Bafta moment coming on... I'll condense it to a big THANKYOU to all who participated and all who supported, especially Flourish Homes who made this project possible. And thanks, Jill, for the photos. 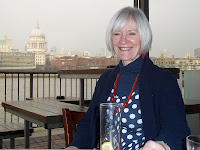 A quick break in London with Christine Coleman finds us on South Bank where the skyline mists into glittering soft-focus as we pop into Tate Modern to prowl among the galleries admiring the way everyone is an installation and even the escalators become art when you stare at them. Supper with Roger Jinkinson, the only writer I know who chats on facebook with Greek fisherman. In Greek. His new collection of island tales will be out soon. 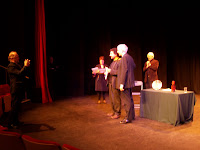 And finally: epic applause to Laurie Parnell, Tracey Ashford, and Philip de Glanville, who lifted an AmDram night to almost inconceivable heights while winning best actor, best actress and best production at the Somerset Fellowship of Drama awards tonight at the Merlin. A clean sweep for the Troupers, immensely well deserved.
Posted by Crysse at 11:30 PM