Idiot Colony, at the Ustinov last week, was devised by Redcape Theatre from the shockingly true stories of women institutionalised during the 1940s for having children by American GIs. The 1913 Mental Deficiency Act was in operation till the 1950s had a 'moral deficiency' clause and could be activated without a psychiatrist - it only needed the prejudice and hostility of two GPs and a relative. The three women performers evoked their characters stories succinctly and the 'business' was impressive but what touched me most was the words. Clever and self-confident performances but less stage skill and more speech would have made it even more emotionally memorable. 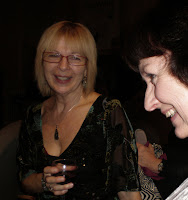 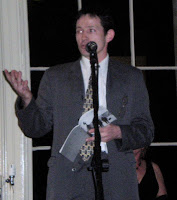 Nikki Bennett's party at the Bath Royal Sci & Lit Institute sounded a little bit daunting, with twenty-five performers lined up. It was actually a delightful evening, smoothly run with a generous bar and fabulous buffet and everyone keeping to their prescribed 3 minutes. A really lovely night.

And on this inauguration day when America was told "the world has changed and we must change with it", if you've ever wondered who writes Obama's speeches, the name (according to the Independent) is Jon Favreau and he's 27. Obama disgorges his thoughts and Favreau crafts them into prose, and the pair then work in tandem. With disgorged thoughts like "Our patchwork heritage is a strength and not a weakness" and "We have chosen hope over fear", I guess the the soundbites write themselves. 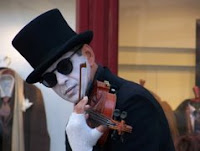 And finally... Bath Poetry Cafe is putting on a Love Fest for February, with feisty Caleb Parkin and foxy Sue Boyle in charge. If you say it's a love poem, then it IS a love poem, says Sue, and wants "as many cafe poets and audience as possible to get a chance to read" in this UNUSUALLY CONVIVIAL, ENGAGING AND ORIGINAL EVENT. Tickets, from bathpoetrycafe@googlemail.com, are going fast.
..
Posted by Crysse at 7:28 PM