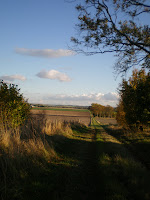 Foxton is a great name isn't it? Sounds like a place in a Rupert Bear annual, with plucky young animals called Algy having lots of adventures in rhyming verse. In fact it's near Cambridge, and the location of Villiers Park education centre, where last week my writer friend Rosie Jackson and I led a creative writing course for twentytwo 'gifted and talented' 17-year-olds from across the British Isles.
An amazing week, and I felt overawed by their energy and charm, a bit like watching seals at play off the Californian coast but with the addition of dazzling writing. 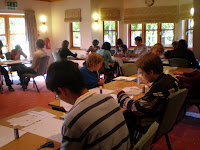 The gee&tees gave us comedy, political satire, and personal emotions, all explored with individual style and lucent integrity. They'd clearly never grasped the concept of Kevin-the-teenager - nasty, brutish, and short of vocabulary; they were delightful company too.

Friday's "presentations" were one highlight of the week, and another was a performance and talk by Luke Wright, whose own blend of talent and candour the group found inspiring.
We had a theatre trip too: Alan Bennett's 'Talking Heads' at Mumford Theatre. I'm not a huge fan of Bennett's whimsical assaults on social Aunt Sallys, and the two monologues memorised by Moonstruck Theatre Company seemed to me dated in their snobby lampooning of low-brow culture. The students were polite and some were appreciative, but I felt more moved by their own work.

Throw in mountain bikes, music, footie, and a Murder Mystery night, no wonder course evaluations were so upbeat. Virtual group hug, anyone?


American update: I see from G2 that the phenomena of Tina Fey upstaging Sarah Palin has now registered this side of the pond. While giggling over the goofy spoofs, you may be interested to note Tina doesn't stray far from the original - in fact sometimes, as in this multiviewed CNN clip, not at all...
And also from that slightly scary big place over there, news of a teacher suspended without pay for allowing her students to read The Freedom Writers Diary. This motivational collection of true stories by young people is a best-selling book and now also a movie. It contains swearing, apparently. Did I say 'slightly' scary? 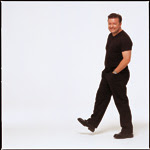 I don't know what the Indiana censors would make of Ricky Gervais on Jonathan Ross (my Razorlight-alert gave me the link - they're at the end) – but he made some good points about comedy writing. He doesn't do gags, he says; just characters. "If it’s just constantly one-liners, the audience is looking at their watches after 20 minutes. There has to be some character." He underlines the point with a hysterically funny story about his mother’s funeral. No, really, it was. And it gave a glimpse of a loving family, and the way outsiders simply can’t touch their grief.

Finally: What were you doing at 22.04 yesterday? Four minutes past ten at night is apparently the time we are all most creative, according to a new survey. (What time of day do they dream up these research projects, I wonder.) Sebastian Faulks spoke up for writers: "I was thinking what I think at 10.04 most nights: whether to open another bottle of wine."
Which reminds me of something I haven't done since I came back from America...
..
Posted by Crysse at 4:43 PM