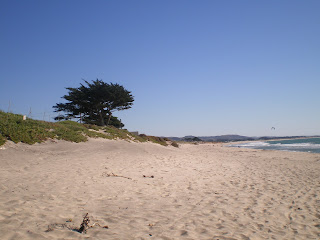 Bill Bryson writes in I'm a Stranger Here Myself of "those sumptuous days when autumn is full of muskiness and tangy, crisp, perfection with vivid blue sky..."
That's how it is here. Guitarist Bill Peterson summed it all up at Mo and Anja's party: "That view out front, sun shining, good food, nice company, great music playing - it doesn't get any better than this." I'd walked that afternoon along the coastal path, entranced by the views of shore and sea and wild birds, and spent the evening listening to 9 talented musicians' varied styles - most of the songs original. 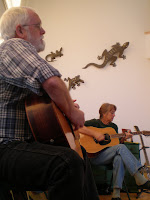 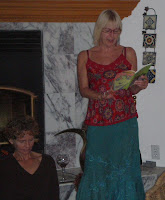 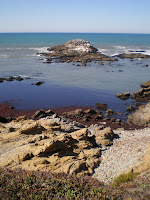 Once again beside the rocks of Pescadero on my penultimate day: seals basking, spray crashing beyond the deep purple of the near-shore lagoons. It's a transitory landscape, as the coastline of California is crumbling: about a foot a year on average, apparently. We reflect on this sombre statistic for a while and then go to Duartes Tavern for artichoke soup and sourdough. 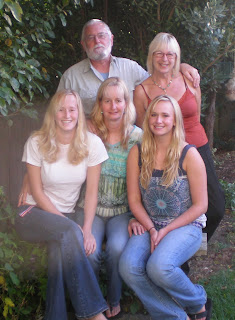 And now I'm packing for my journey back to the UK, to dull grey days and the tension of trying to get hold of a car in time for next week's course in Cambridge... I'll have to stop giggling over Bill Bryson's account of the safety demonstrations on transatlantic flights and prepare myself to watch closely while the value of the whistle to attract attention is explained by United Airlines stewards self-taped into yellow lifejackets. Hoping, of course, that this is a hypothesis I won't have to test.
..
Posted by Crysse at 7:13 AM

Email ThisBlogThis!Share to TwitterShare to FacebookShare to Pinterest
Labels: California