Words and music - and more cake than usual 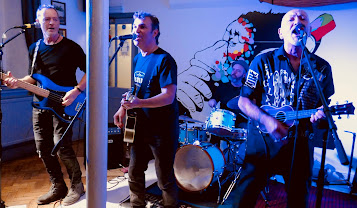 As this week's bulletin is mostly on a writerly theme, let's start with a blast of music: Saturday evening saw the much-anticipated return of Frome's hugely popular quartet, The Raggedy Men, playing at The Sun to an enthusiastic audience. The songs are all punk classics, but the skill and polish of the presentation isn't '70s-rough: these are all seriously good musicians and terrific  entertainers. The Guns of Brixton is still my favourite, but Andy, Bugsy, Pat & Carl make every song special. 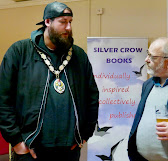 Now buckle up for a lot about writing. It's been five years since Frome Writers' Collective launched 'Silver Crow', a quality-control system to support self-publishing authors, so Friday night saw a birthday party at the Masonic Hall, with all FWC members invited.  This was a chance for authors to mingle, with a complementary drink, and show off their books, perhaps selling copies too. The sitting-down part began with a few words of encouragement from Mayor Andy, before Alison Clink, well-known in Frome for leading writing groups & classes in Frome, spoke of their benefits for writers. 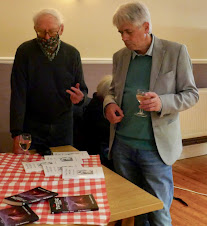 There are currently 18 books boasting the Silver Crow logo, and Nikki Coppleston, who launched her 'Jeff Lincoln' detective series in 2016 this way, talked about her experiences and her new novel The Promise of Salvation.

Gill Harry shared the story and images of her engaging new book for children with an interest in history: Zoe and the Ancient Egypt Adventure - superbly self-illustrated. Here's Alison, soon to be published by John Chandler of Hobnob Press (on R) who has added several  Frome writers to his list, including poet David Thompson (on L). There are more pictures of this event on the FWC facebook website. 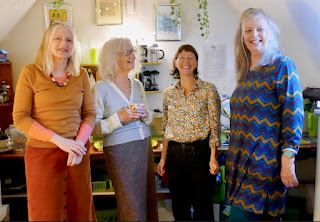 Writing continued the theme of my week on Saturday: Following my talk on writing short stories at the Library to a small but delightfully enthusiastic group, I headed for the upper rooms of the Black Swan, where The Write Place was hosting a tea-party, partly for self-promotion and partly for fun and mince pies with mulled wine. This popular project was the inspiration of Frome writer Kate McEwan, and has a big following now among writers who like to write in a quiet place but with a sense of surrounding support - sounds like the perfect combo. There are monthly one-day writing retreats which include a starter-session, too. The 'Chat Room' was full and very friendly - here's Kate (on the right) at the end of the event. Kate started her literary success in 1983 with an illustrated history of the south-west suburbs of London, and she reminisces entertainingly about initial struggles,  until Ealing Walkabout sold out its first print-run of 3500 and rushed to reprint 5000 more.

Proof Pudding Club night at River House nicely rounded off this wordy week: this group's role, devised by Tina the ever-inventive custodian of Hunting Raven Books, involves appraising the promotional proof copies of new titles, and eating cake. In the final roundup, Ai Weiwei's tale of 1000 Years of Joys and Sorrows emerged as an absolute must-read - this isn't surprising: I still have disturbing memories of his exhibition in London six years ago filled with courageous criticisms of the Chinese government, highlighting their callous treatment of their people. The odd, jelly-baby, look of the book jacket almost, but not quite, evokes the collections of little faces released by campaigners attempting to stop human traffic of hundreds of thousands of children in China...  One to read, if you can. 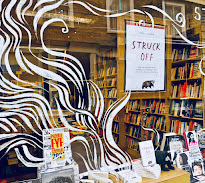 And while we're still on the subject of books...this was the week that should have seen a high profile party launch for Struck Off at the Silk Mill - another Hobnob title -but, sadly though wisely, author-host John Killah decided to cancel rather than cause Frome the anxiety of a large group gathering from other areas. His novel now has its own private window-party in Hunting Raven, ready to delight fiction readers who may wonder what goes on in the world of a successful trial lawyers... think insider knowledge plus satirical humour, this tale may do for the legal world what David Lodge did for academic life in the '80s.

So this week's verbosity ends with an apology to Walking Festival, and the '6x6' Art exhibition at the Silk Mill, both of which sadly were squeezed off my to-do list, and with a picture of dawn over the Cooperage estate. 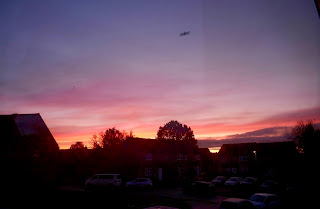