Wild wuthering and other fantastic displays 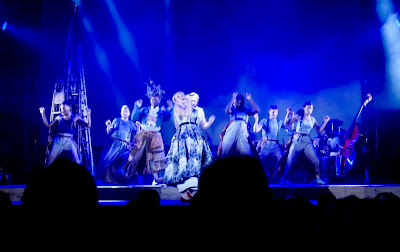 FORGET WHAT YOU KNOW, the preview for Wuthering Heights at Bristol Old Vic urges, THIS IS NO PERIOD DRAMA, and director Emma Rice's version of Emily Brontë's gothic fantasy of passion revenge and redemption, enhanced with music, lighting, fights, dance and puppetry, is indeed no ordinary remake. It's spectacularly wonderful, especially in the first act - in fact you could practically leave in the interval: the recovery strand doesn't grip or intrigue as much as the dark themes of child abuse and Bristol's own connection with slave shipping. 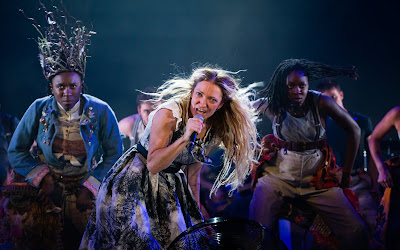 The storytelling follows the original version in that it's all narrated to Mr Lockwood who, after being blown in by spectacular stage effects and set upon by dogs, is curious to know why a ghostly woman comes screaming at his window. Some of the visual devices, like the birds flying past for every death, do effectively enhance the storytelling but the personification of the moor by various cast members with spiky headdresses as a kind of Greek chorus didn't for me create any real sense of its presence or significance. But overall this is an amazing achievement with a superb cast: Lucy McCormick plays a psychotically disturbed Cathy, and Ash Hunter is stoic as abused, vindictive, Heathliff - both with terrific singing voices. Also particularly engaging are Tama Phethean as both the young Earnshaws, Sam Archer as a lissom Linton and Katy Owen as his adorable little sister Isabella.
This National Theatre, Wise Children, Bristol Old Vic & York Theatre Royal co-production is at BOV until Nov 6 and the last four performances will be streamed online book here - highly recommended.
(The pic at the top is the end of the first act, as sneaked from my camera - the others are promo shots from the website.) 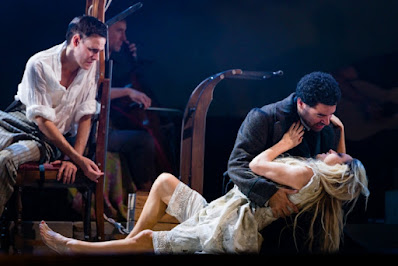 This has been a theatrical week in other ways too. 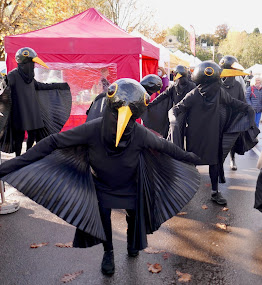 Frome's blackbirds', previously featured on several TV channels and in the Guardian, are preparing for their protest at COP26 and toured the town on market day to raise awareness.  Their message is simple: if the conference doesn't succeed in changing policies, all birds will die and so will the rest of the life on earth.  We're lucky that our town council supports this message, as do many local groups which monitor our river and local wildlife and, encouraged by our Green councillors, take a practical role in cleaning our streets and general environment. So it probably won't surprise you that there was no town-sponsored firework display to mark Halloween: much better than that, we had a drone display over the old Showfield, watched by thousands. This was designed by Frome-based Celestial using a fleet of 256 drones to create glowing coloured images in the sky to a moving soundtrack of poems read by local children, the best civic event since Jenson Button scorched up and down the high street doing donuts in our 2013 festive celebrations. After sensationally reforming in various ooh-ahh images, the display concluded with a love-message to the town that none of us here will forget. And no dog-owners were enraged. 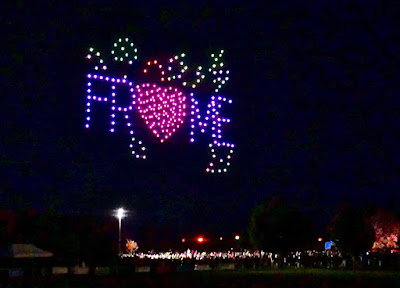 Moving on to less volatile, though also performance-related art now: and an up-coming exhibition at the Gallery at the Station currently in preparation. 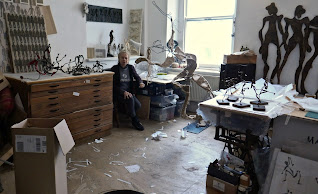 Artist Marian Bruce is know for her powerful figures, often life-size and embodying a sense of mute suffering. Currently, however, her Frome studio is full of the energy & skill of the dancers of Havana, as Marian prepares for In Movement at the Gallery at the Station - an exhibition of drawings & sculpture inspired by her collaboration with Acosta Danza in 2018. Marian was in Cuba as designer for Chris Bruce's production Rooster and became fascinated with the body postures of these flexible dancers. She showed me her initial sketch: "I was sitting in a bar on a warm night sipping a mojito, sea salt on the breeze and music all around, and I picked up a black biro and on the back of a novel I was reading, I drew these, each of them in one continuous line - that's the Zen influence." You can see the stunning result here and the exhibition will be opening next week.
A double helping of splendid music this week: in Bar Lotte on Wednesday evening it was the sensational combination of saxophonist Iain Ballamy joined by Anders Olinder (keyboard) and Henrik Jenson (double bass). All three of these performance giants are also composers, and a fair amount of creative improvising appeared happening throughout their set, which was hugely exciting. 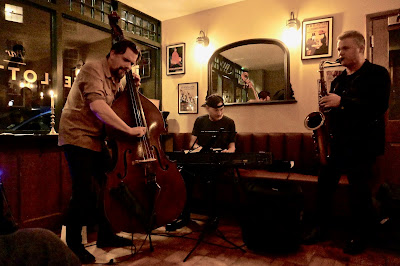 Also dimly lit - or actually in this case, erratically & with savage smoke-effects - was the mightily-anticipated return of the magnificent Back Wood Redeemers, hosted by The Cornerhouse on Saturday evening. All our favourites were there - Right Thing Wrong, Hold On, Chocolate Jesus, and other irreligious scurrilousness - with the redemptive line-up further enhanced by Sarah Hobbs on loan from the Hoodoos on double bass. 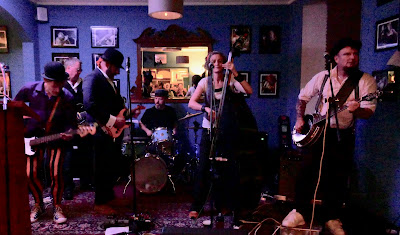 With a definite feeling around that the window for shared activities may soon be closed, either by legislation or winter wariness, such events are treasure. Ellie and I snuck in another cocktail night on Monday but most connections are outdoors.  I'm constantly careful, using masks & frequent flow tests and opting for a 'safe' performance of Wuthering Heights instead of press night, but as we all know human contact is a vital aspect of maintaining health. Breakfast chat meetings and coffee catchups can all still be outdoors, and the writers of the 'Fromesbury Group' managed a meet-up after a long break, so I'll leave you with the selfie Debs took of her, me, Emily, and Debby at the Archangel. Other pub gardens are available! 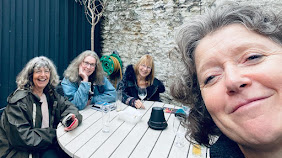