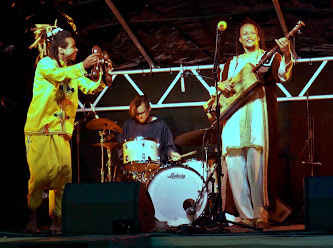 Despite the loss of indoor venues, the 2021 Frome Festival succeeded in providing an opulence of visuals, sounds, and activities in an incredible diversity of events - in fact it's incredible that the last ten days of brilliant entertainment right across town have been almost entirely outdoors. 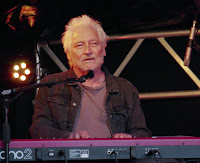 This 10-day fiesta, which began last Friday, has been crammed with activities and performances - let's start with The Opening although it wasn't actually till Wednesday: a three-night music event on a pop-up stage in the Silk Mill yard, organised by Dave Smith whose sensational drumming was a festival highlight in itself.  All three sessions were brilliant: pictured (above) are Mohammed Errebbaa & Driss Yamdah on the second night - which also gave us sensational sisters Currer Bell - and Frome's Pete Gage on keyboard, one of five fabulous acts on the final night. 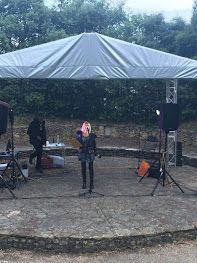 Still shuffling personal highlights, shifting to Tuesday now for the  Poetry Cafe on ECOS amphitheatre where rain threatened all evening but only delivered briefly once, and 45 people spaced themselves on the stones to listen to twenty original poems performed on the open-mic by their writers, with mega-popular Liv Torc as guest.  Liv is always brilliant and the quality of the open-mic readers is amazing: check out for instance this stunning poem from Karl Bevis about the silencing of theatre I am not viable.  I have absolutely loved the privilege of running this Poetry Cafe from its inception twenty years ago: I'm stepping down now but I'm sure spoken word/slam/standup/ performance poetry will continue in Frome, whatever name it goes by. Thanks Annabelle for the picture, taken from the far end of the amphitheatre.

Town walks are always popular in the festival, and this year they were more popular than ever, with themes ranging from biodiversity in the churchyards to Frome's history in terms of Slavery, Sedition, and Sin -  this one was led by historian David Lassman and me - here's the final stop with David expounding routines at the old workhouse in the second of our 2 sold-out trips. Eleanor Talbot's  latest Variations on a Theme programmes includes a focus on our talks - you can hear a bit of the interview at 19.40 minutes in, with the rest at 40.10. Episode 91 continues the festival tale, with more reviews and comedy clips. 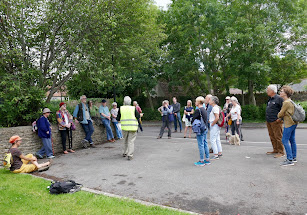 The Hidden Gardens trail, outdoor entertainment of the horticultural kind, is always popular - this year over 800 maps of private gardens open at the weekend were bought by avid visitors. This is an absolutely lovely part of the festival, as Frome shares its passion for nature so generously, with 32 gardens to visit - I only managed ten but they were all magnificent in various ways. Here's one of several with a sumptuous lily pond, this one attended by glittering damsel flies. 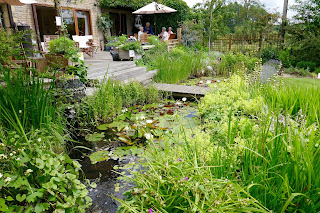 Another popular aspect of individuals' involvement is the Open Art Trail, offering festival-goers an opportunity to see the work and studios of our many local artists - fifty of them in fact, in 21 venues including outlying villages. Again, it's impossible to pick a 'best' from this amazing diversity of talent: here's St Mary's Church on Innox hill converted temporarily into a festival gallery! 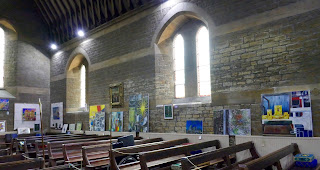 St John's Church in the town centre always puts on a flower show for festival: the theme this year was 'Reconnection', expressed in displays created by members of the Frome Floral Art Society. Arrangements combined props to represent positive themes: the journey back to the outside world was expressed in various ways, one unprepossessingly adding a union jack, but this is a nicer one.

Also art, of a curious kind, was the Secret Staircase which provided private access to a location revealed after booking, and fifteen minutes of strange & strangely calming music composed by Helen Ottoway & played by Nick Sorensen. There were several of these mysterious locations around town and mine transpired as the 3 floor stairwell in the Silk Mill studios, originally nonexistent but ingeniously added by current owners Kate & Damon Moore by cutting a hole through all the floors and literally building it step by step. Just another of the curious tales of Frome's secret history. 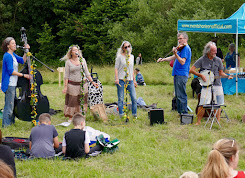 The final Sunday gave a chance to see a few more gardens, and art venues, and to pop into the Picnic in the Meadow where Rodden meadow was offering stalls and family entertainment - here's popular local band The Hoodoos harmonising, conveniently close to the Active & In Touch tea'ncake stall...

Ending this festival edition with a return to Marston Park for the finale, as the rain fell steadily on the lake and even the ducks scuttled into our covered stage area, and Bonne Nouvelle played two sets of their delicious mellow, nouvelle-vague style, covers. A superbly quirky finale to a fantastic week of Frome Festival. 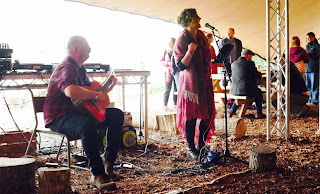 And if one image could sum up my festival, it would be this snap by Rosie Eliot, of us happily ignoring the weather, and the state our country's in - just enjoying music and reconnecting our friendships. 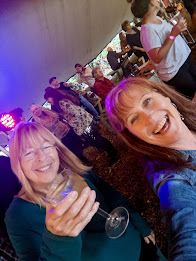