Back in the real world, Frome-style

Let's start with an argument- with William Boyd's The Argument at Theatre Royal Bath,  as part of their lively Summer Season. This is a stylish comedy of manners - a Restoration Comedy for the 21st Century, perhaps, as it has all the elements: amorousness, deceit, conflict, and satiric parody of social mannerisms. 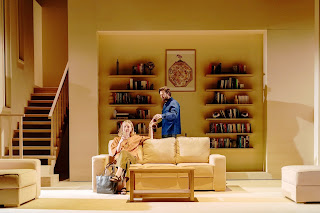 There's a cast of six and action spans ten scenes and several weeks in four domestic locations, all cunningly contrived in seconds by shifting backdrops and key props. This impressive stage design was by Simon Higlett and insured an energetic pace, as did imaginative direction by Christopher Luscome, enhancing a script which has vigour but not much variety within a very narrow social strata - upper-middle to upper class, all casually announcing their pedigree in dialogue as in some early radio plays. 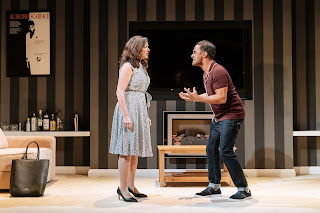 Meredith’s marriage to Pip is on the blink - no surprise there as she’s a shrew who'd need a Petruchio to tame her, rather than nondescript Pip - and the premise strenuously maintained is that when any two people come together, they argue.
While the oldies bicker about the breakup, Pip’s friend Tony (who Pip grabbed by the throat in an argument) even manages to argue with Meredith’s friend Jane (who was thrown out by Meredith after an argument) simply because he, Tony, didn’t like the way she, Jane, ended her sentences on an upward note so they sounded, like, questions?  You get the impression that such contemporary trends, including the ubiquitous use of mobile phones, irritate the writer enough to shoehorn them in for conspiratorial audience mirth. 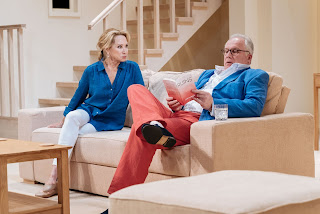 The scenes with Felicity Kendal, in a role more like the The Good Life’s Margot than Barbara yet still irresistibly alluring, with Rupert Vansittart  were the most satisfying as individual cameos, as some of the other scenes seem merely pieces of the jigsaw. It takes 80 minutes to finish the picture, and from the final applause it appeared the Bath audience had enjoyed them all.

Music now, and within nine hours of touchdown after 17 hours travel and a 16 degree temperature drop, I was at Hauser & Wirth's Radić Pavilion where Canadian veteran folk singer Old Man Luedecke was joined by the Hoodoos, self-tagged 'swampy, bluesy, folksy' and featuring the fabulous vocal harmonies of sister Yvonne and Mary. This is definitely one of the 'now' bands locally - watch out for them on Visual Radio Arts next month! 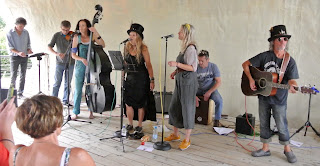 Paul Kirtley's mission to raise £5000 for Bone Cancer Research continues, with another house party at the Artisan on Friday. The Bones 'house band' performed in split incarnation, as guitarists Paul and David Goodman had a change of bass and cajon player for their second set. Most of the songs were familiar favourites but Paul also included a moving song of his own composed for a lost friend: There's a blue boat out in the harbour.' 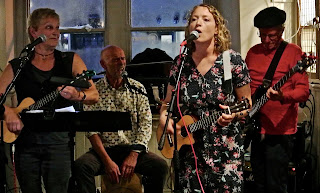 Guests once again were The Decades with a lively set including a superb version of Dido's Thank you and a sparky rendition of that Fun Boy Three's 1981 classic The Lunatics have Taken Over The Asylum - great variety and energy from this popular foursome. 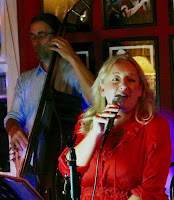 Sunday night's jazz at the Cornerhouse with Graham Dent's trio featured this month the gorgeous voice of Emma Harris with a varied repertoire including the hauntingly beautiful Gregory Porter song There will be no love that's dying here for me.

And I'm including this image from a party on Sunday afternoon because it shows an instrument I'd never heard of - the ronroco, a Venezualian version of the ukelele, similar to the charango but more baritone. So there you are, the blog that informs as well as bragging about the awesome creativity of Frome.

The Listen project at Black Swan Arts has been offering a range of events throughout the month,  and the Listening Hub at the Round Tower has continued its esoteric 'Playlists' available daily on headphones - on Saturday I caught some of composer Helen Ottaway's choice, a Peter Greenaway film about John Cage, who she has worked with and much admires.  This is project of fascinating diversity but it's difficult to illustrate the concept of listening as art, so instead here's a more visible display, from the current Hauser & Wirth exhibition of Unconscious Landscape - works by female contemporary artists.  Spider, a bronze piece by Louise Bourgeoise made in 1966, dominates the gallery, and apparently represents protective motherhood. I liked it. 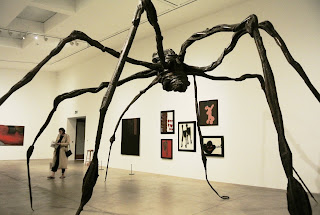 And despite the systemic trauma of returning from sizzling sunshine to rain and unseasonal chilliness, it's lovely to be home in Frome, where blackberries are already hanging along the path across the Dippy and the purple blaze of rose-bay-willow-herb is becoming a white forest of feathery fans as the petals fall. Autumn is arriving, surprisingly early, but then autumn always does...
Posted by Crysse at 10:27 AM