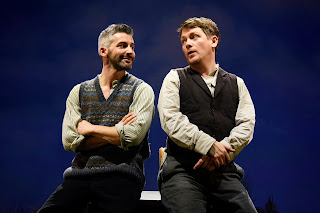 Stones in His Pockets was written nearly a quarter of a century ago - evidence, if more were needed, that national stereotypes never fade.  Tinseltown has come to a wee oirish village and the locals all want to be extras, happy to recreate rural pastimes like bog-cutting for £40 a day and a glimpse the glamorous star who struggles with her oirish accent in an implausible romantic storyline. Challenge comes from a real-time plot intrusion, but will it be too 'unreal' to be accepted in the synthetic world of the movie-makers? What makes this play interesting is the device of using two actors, both men, to represent everyone - locals, extras, production team, crew, and stars. With minimal adjustments to their costume, Owen Sharpe and Kevin Trainor used gesture, posture, voice change, and quite a bit of hair stroking to not only convey the ongoing friendship of Jake and Charlie but also more than a dozen other characters - arrogant, seductive, decrepit, camp, stoned... an amazing tour de force from both.  Marie Jones' script has won awards and plaudits in the past, and this Theatre Royal Bath production directed by Lindsay Posner is sure to be well received when it moves on to the West End.  Image Nobby Clark 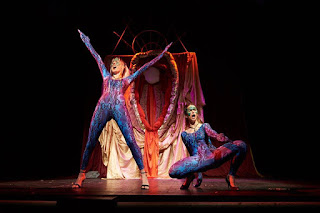 Another theatre, another double-act show about contemporary culture: two women this time and about as different as a performance could be: Queen Cunt - Sacred or Profane? explored attitudes to feminism in a series of edgy and outrageous 'absurd comedy' sketches at Frome's Merlin Theatre in the finale of their highly-praised tour. Deborah Ward and China Fish, the 'performer writers', take satire to extreme heights of inventiveness then deliberately crash-land in wild vulgarity, parading parodies from a drunk Virgin Mary to a dancing queen Theresa May, savagely lampooning men who oppose feminism then delightful as old ladies enacting a sex video for our edification... and there's a vast talkative clitoris onstage projected between each cameo onto the female orifice that comprises the set. With a project so determined to defy sexual stereotyping it is probably outrageous to mention that Deborah and China are both gorgeous-looking women, but they really are, so I will. 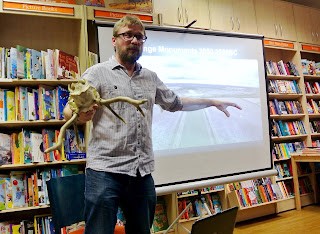 Here, area by area across the British Isles, you will find all the still-visible traces of ancient history located and identified, so wherever you travel you can find and appreciate these glimpses of our past. Somerset alone has 12 such prehistoric sites worthy of pilgrimage, and for your convenience there's also a section on which are 'best for' photos, or children, or pub lunches...  This is a book that promotes itself by its photography and clarity, and it was also really interesting to listen to Dave's story of its making, a chronology of his own personal immersion in historical landscapes as well as the fascinating timeline from the palaeolithic era around 850,000 years ago (go to Norfolk for the earliest find here) to the coming of the Romans in 43AD. 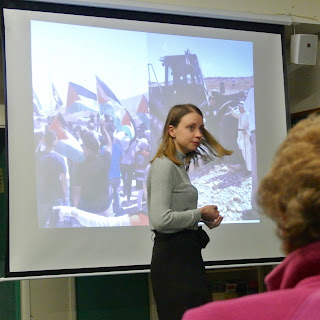 Frome Friends of Palestine recently invited student applications for a 2-week visit to Palestine in order to provide first hand reports, and the chosen 'reporter' was a young student of politics in Bath. Deivi - she's Estonian, with flawless & sophisticated English language skill - was a lucky find.  Her talk, illustrated with her own and media photographs, was an exemplary visual diary of courage and realism in a situation as tragic as it is dangerous. She visited Hebron, experiencing the checkpoints and harassment, went with the International Solidarity Movement to a village about to be demolished, and finally experienced the tear-gas reality of the Gaza border protest.  Her sensitivity, as an outsider in this struggle, was as impressive as her empathy: 'They do not put themselves at risk like this expecting to end the occupation, they do it from a place of affirming their identity in the struggle - they are willing to take this pain because the pain of losing your identity is much stronger. Even the children understand this."

Back to Ireland again, in a way, to end this post, as Frome's  Celtic band members arrived en masse to celebrate St Patrick's day at the Cornerhouse.
Posted by Crysse at 9:35 AM