Festival time starts in February for Frome, with a flurry of form-filling to ensure a place in the brochure that lists everything going on in town in July - here's a sneak preview of the cover, as introduced by director Martin Dimery at the recent conference.  Theme this year is Singer family foundry, the massive creations of which can be seen around the world, but there will be plenty of non-bronze activity too: look out for poetry (from Hip Yak Slam & Festival Poetry Cafe) and drama from (among other groups) Nevertheless Productions who've teamed up with a talented quartet from Frome Actors Network for a sizzling hour of pub theatre at the Cornerhouse. The title is still under wraps but FAN are already smouldering into an impressive blaze so watch, as they say, this space.

The new exhibition of ceramics by Peter Hayes at Black Swan Arts has aroused much interest locally.  Peter has travelled widely in Africa, India, Nepal, and New Mexico and his explorations into 'how things are made' in the context of their landscape are assimilated in his work. His statement is perhaps apt for any of the arts: 'It is the material that is in charge.. it is my job  to push it to its limits and somehow an equilibrium is reached between make and material.' Friday openings are always followed on the Monday by a session for writers to respond to the art ('ekphrastic poetry' is the technical term - Keats was a fan, and so was Auden) and this month's leader Christina Sanders in an excellent session emphasised the 'landscape' of the gallery as part of the art: some responses from the group have been posted on the website of Words at the Black Swan. 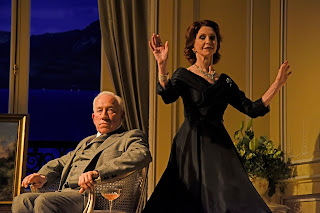 Moving to drama now, in a week with two big shows: A Song at Twilight, now playing at Theatre Royal Bath, is one of Noël Coward's last plays and has been seen as essentially autobiographical although the playwright himself claimed the situation was inspired by Max Beerbohm's low-flame vigour when visited by an old fling. Somerset Maugham is also in the frame as a model for this repressed and caustic ageing writer confronted by failure both emotional and moral, and challenged by his ex-mistress to make amends. 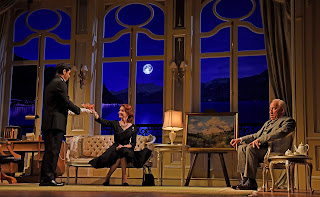 Simon Callow has had to repress his natural wit and endearing twinkle in order to fulfil the part of Hugo Latymer, which will probably be a disappointment to his fans, but there are some amusing lines, mainly from Jane Asher's Carlotta.  Jessica Turner as Hugo's wife Hilde, confined in role to a loyal foil in the first act, is excellent when denouement arrives, and Ash Rizi's impassive manservant Felix uncorks a mean bottle of pink champagne. Action all takes place in a hotel suite in Switzerland for which designer Simon Higlett has created a set of pale opulence with a large picture window where the sky slowly darkens as a full moon glimmers across the lake beyond. Stephen Unwin's direction uses this chill space with its ignored beauty to emphasise the distance between his two central characters. On until February 23rd. Images: Nobby Clark. 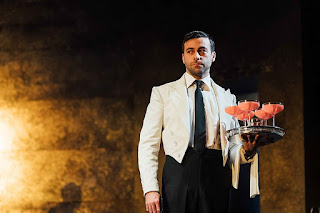 Over to Salisbury Playhouse now, where in a similar decade (1962, to be specific, when Helen Shapiro was walking back to happiness with a woopah oh yeah yeah) Felix's rosy champagne was nothing like as lethal as Giuseppe Renzo's raspberry cocktails, literally a killer when the first corpse  hits the stage in The Mirror Crack'd, an Agatha Christie classic cleverly adapted for stage by Rachel Wagstaff.  Times are changing in St Mary Mead: there's a 'development' and not only are low types arriving but the big house has been bought by an american for a movie shoot. 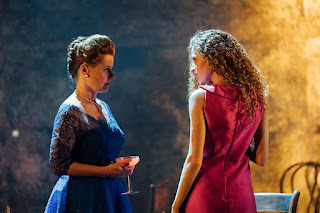 As shooting becomes real and confusion mounts, Miss Marple is thrilled to have something other than her sprained ankle to think about and uses her renowned knowledge of human nature to solve the mystery. Susie Blake follows none of the Marple screen models and is absolutely excellent in this central role as voyeur of a brilliant ensemble: lovely film stars (Suzanna Hamilton & Gillian Saker) brusque director (Joe Dixon) loyal butler (Huw Parmenter) and other suspects, including the husband of the first victim who looks a bit like Dr Crippen... while Chief Inspector Dermot Craddock flounders and Dollie Bantry (Julia Hills) keeps the spinster sleuth supplied with gossip and clues. 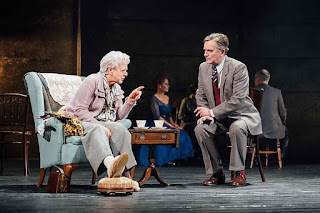 Effective set & costumes and Melly Still's direction combine to create engaging story-telling through creative use of flashback cameos,  rewinding and fast-forwarding to recreate a different recall. Great fun for anyone who remembers the era and the who-dunnit genre, as a full-house audience at the Saturday matinee appeared to - though I did overhear one lady in the queue for the loo confide to her friend that the story seemed 'a bit far-fetched...' On  here till 9 March, then touring. Images Helen Murray

Rounding off a varied week, Sunday here in Frome was the annual Potato Day and Seed Swap in the Cheese & Grain, co-hosted by Incredible Edible. Not just lots of buckets of potatoes and masses of packets of seeds all for planting but environmental information too, this lively and friendly event attracted a big crowd throughout the day. And for anyone who ever doubted that our bit of southwest is simply magic, here's what the river looks like along near Nunney... 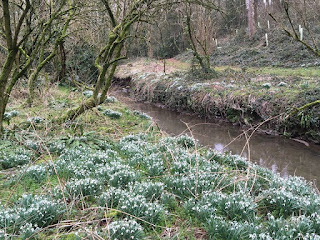