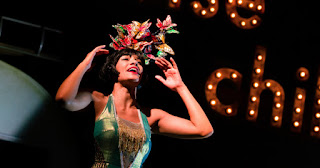 'It's a wise child that knows its own father', in the words of Homer, and paternity is a central strand in Wise Children now at Bristol Old Vic with Wise Child - which is also the name of Emma Rice's new 'joyful, emotional, ensemble touring company' here in co-production with Old Vic, Belgrade Theatre Coventry, Oxford Playhouse, and York Theatre Royal. With all that involvement you'd expect something sensational, and you'd be right: it's a flamboyant, exuberant, show with all the elements BOV seems to most relish: onstage musicians, circus-style physicality, fantastic costumes, bold casting, puppets, and dark delicious fairytales made modern - it's Greek mythic in scope and Shakespearean in splendour and it's absolutely fabulous. 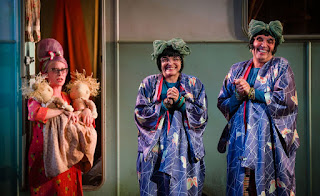 In the past I've been querulous about puppetry but the little twins as babies and as fighting toddlers are heart-winners, and the dancing-singing-cartwheeling cast are all superb. I particularly liked Sam Archer as uncle of some of the twins and Katy Owen as the saucy naturist granny who sex-educates her adopted girls by demo with a ring donut and a stick of rock. 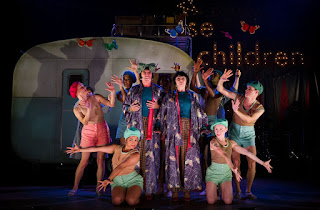 It's based on Angela Carter's novel about warring theatrical families, so you might expect extreme feminism and Grimms-style grisliness, but the story chicanes evocatively through time & times largely happily, with some poignant moments and Wildean lines: It is every woman’s tragedy that after a certain age she looks like a female impersonator, opines Dora (delightfully played by Gareth Snook, which enhanced the epigram). For me personally the fact this is set in 20th century South London, around Brixton in fact - my stomping ground as a wayward teen - was sprinkles on the iced donut. On till 16th February, definitely recommended.

Two different art exhibitions opened on Friday: the HUBnub gallery, a beautiful space which needs strong work,  has a show that meets the challenge: impressive paintings by Jamie Gallagher which explore 'the psychological effects on humanity of the current extremes of social, political and cultural disruption.' Post Normality Reality Disorder attracted a big buzz at the launch, & I need to go back to interrogate these pieces again...

Also a powerful magnet and a lively & sociable launch: The Sands of Time in Black Swan Round Tower represents the 'creative estate' of Stina Falle, well-known in Frome for her extraordinary talent and visionary imagination.

Stina has decided to sell, by chosen donation, all her drawings, paintings and makings collected throughout a prolific creative lifetime, with 100% of takings going to the mental health charity Mind in Somerset. The tower on Friday was cram full of sketches, storybooks, portraits, and installations - here's Stina behind a symbolic shroud - but they were going faster so get there before February 2nd if you want to have a piece of unique artistic history. 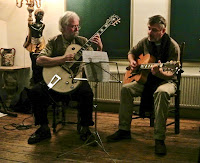 Music section is sparse this week, as Sunday jazz is on a midwinter break and no Roots session either, but there were some good sounds at Hat Tricks variety night at Three Swans, with jazz melodies on guitar from Graham and Adrian, and several excellent unaccompanied singers. With a couple of story-tellers and a handful of poets in the hat-mix too, this was once again a delightful night.

Moving out of town to end the week in Bath, where Frome historian and author David Lassman led a sell-out crowd of 40 Bathonians plus two interested Froomies and a helpful Toppings bookseller (Felix also organised coffee and cakes for us all) around key sites of Bath describing the events that had devastated the city. 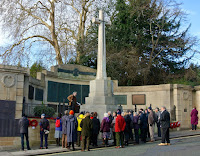 As sunshine pierced the frost, we heard insights into the blunders that led to the worst blitz, and descriptions of the lost vistas - it was all so interesting that several locals joined us uninvited at various points and there was a rush to buy David's book Bath at War 1939-45 at the end of the tour.

Finally... it was Burns Night on Friday, so if you enjoyed carousing with whisky and (possibly vegetarian) haggis, as I did, I hope you included in your reverential readings the Ode to the Immortal Bard of Ayr, Robert Burns, by Sir William McGonagall, a tribute so full of excruciating lines it's like eating turkish delight with toothache.Your genius does sparkle bright / like to the stars of the night,this 1807 paeon of praise declares, ending fervently You were a mighty poet, few could with you compare /and also an honour to Scotland, for your genius it is fair. And you can't say fairer than that. 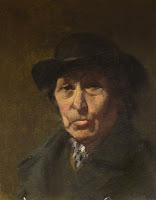 McGonagall is often mocked now (like I just did) but for a handloom weaver in late-19th century Dundee he did well and never appeared to doubt the merit of any of his prolific output - he showed his first piece to his local preacher who admired it with commendable diplomacy: "Shakespeare never wrote anything like this." Failing to find fortune in New York, he returned to Dundee where, for 15/- a night in the local circus, he read his poems to crowds who pelted him with eggs, flour, herrings, potatoes and stale bread until the council banned the act for causing riotous behaviour. Mcgonagall wrote a poem chiding them. Interestingly, the 'world's worst poet' was making a living out of his bizarre lyrics at a time when the weaving trade was dying, and there was a theory in his lifetime that Sir Topaz Mcgonagall, Knight of the White Elephant, was actually "not so daft". Reader, you decide....
Posted by Crysse at 7:42 PM