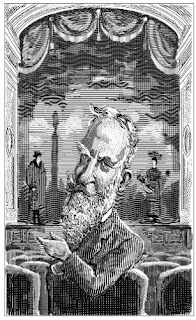 A new performance of Pygmalion is always a delight, partly to see if the ending has been tweaked - against the playwright's expressed intention - to make the play an unlikely romance rather than the social critique that George Bernard Shaw intended. In this, as in many other aspects, Frome Drama Club at Merlin Theatre succeeded admirably. In director Simon Blacksell's production, David Holt's eccentric linguistic professor and Annabella Fairgrieve's utterly wonderful flower-girl do not seem likely to settle into future domesticity, even if charming Colonel Pickering (Philip de Glanville) remains to referee and she stops throwing his slippers at him. Much of the humour of the play is created by the absurdities of the concept of class status, and strong performances by the women in the team highlight this: Lynne McCaffrey is excellent as  practical, caring, housekeeper Mrs Pearce, in contrast to the silliness of snobby Mrs Eynsford-Hill - superbly played by Suzy Howlett. The men are good too, though it would be good to see more of Freddy in the first scene (he gets somewhat lost behind the umbrellas) and Alfred Doolittle, the usually rumbustious dustman, seems a bit subdued even before his unwanted status elevation. 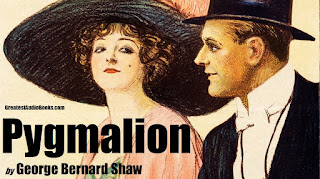 Gillie Richardson's costumes and Judy Simmons' hair design, plus simple but effective sets, ensure that this resoundingly successful production looks beautiful on stage though I can't find a promotional image which shows that, so instead here's a poster from Montreal and GBS in 1914 directing the contentious first London production.

From Shavian socialism to the current plight of the planet, or one of them: Extinction Rebellion has a strong contingent in Frome, participating visibly on the London Bridge demonstration, and on Saturday in Frome they showed there's big local support for their determination to change policies steadily, and increasingly speedily, destroying our world. 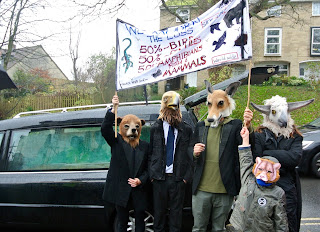 A dramatic Funeral for Extinct Species set off from Rook Lane with a couple of hundred people following the hearse downhill to the precinct, where we gathered in the precinct around the coffin - respectfully carried by a bear, a wolf, an eagle and a (sort of) ram - to hear a poem listing and lamenting the species killed and threatened by mankind's activities. 60% have disappeared in the last 70 years. 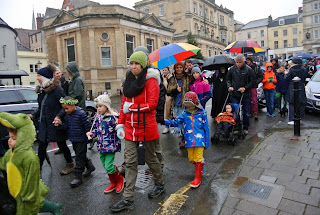 The slow march continued, escorted by the Frome Street Bandits (dressed in mourning without their distinctive red), to the market place where Green Party's Theo Simon ended the event with a note of hope that while we have to accept the world is changing, we may be able to stop this mass extinction if we have the courage to continue speaking out. And then we had a song from his band Seize the Day, a bit of drum'n'dance to warm up, and hot chi, free from Mahesh on the Loop-de-Loop stall. 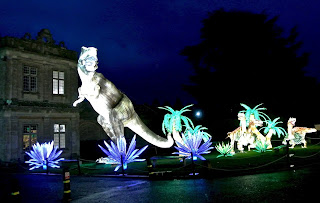 Extinct animals seems an unlikely segue but it actually works perfectly for Longleat festival of light this year, which the Sustrans cycle path has happily made available again to non-car users. There's a kind of Tintin theme here, plucky kids with a little white terrier, dashing around places and eras having adventures, one of them being the time Longleat House was assailed by prehistoric creatures. 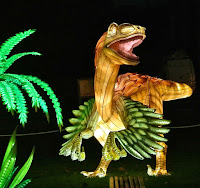 Possibly that's a camptosaurus lurking by the bedroom windows, though it could be an iguanodon with a small head. I've no idea what the one with green wings is, but they all looked great in the dark as the full moon rose.

We're now at the start of the annual Gift-Anxiety festival, though fortunately - to my unreconstructed-Scrooge mind - there's been a slackening of the grip of that particular fever, and Frome anyway seems to focus on the opportunity to support its many local craftsfolk rather than tax-avoiding internationals. 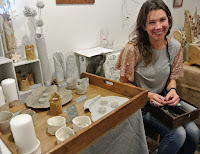 So we've already had two christmas markets - Black Swan hosted a lovely evening event throughout its cafe for its artisan traders, and Kate Cooke - pictured here at the Black Swan event - opened up her house for two days as well. There will be more to come! 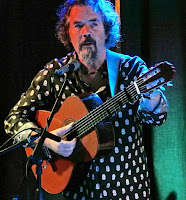 Music this week once again shows how high the bar is set in Frome: the Wednesday Roots Session featured Keith James' skilful performance of a great repertoire which included Nick Drake & Leonard Cohn songs and poems of Lorca and Neruda. The fabulous Critters at the Cornerhouse on Friday opened with Cohn too, then ranged from country music to reggae as dancers filled the floor at this massively popular gig - 8 great performers superbly hosted by singer Nicola Mascall. 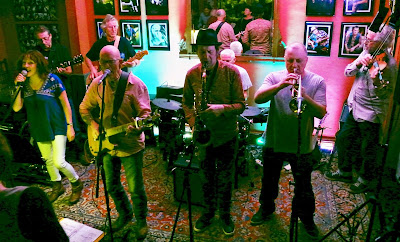 Sunday is jazz night at the Cornerhouse, always good and sometimes incredible: Frome often punches above its weight musically and this was one of those times - a  concert of capital-city quality as John Law on piano with Riann Vosloo bass, Sam Crockatt sax, and the incredible Dave Smith on drums gave us the music of  John Coltrane. I'm still quivering....