The Chemistry of Bronze as an art concept to be honest didn't attract me much until first glimpse of the amazing exhibition which opened last Friday at Black Swan Arts. Bronze is all about weaponry and statues of warmakers isn't it? Well, no. 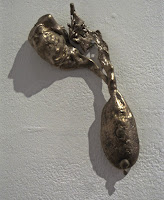 Superbly curated by Hans Borgonjon, the casting foundry Art of a Fine Nature showed a diversity of creations from glowing guitar-fronts to random Rorschach-style seahorses and porpoises retrieved from the drips bucket and presented facetiously for inspection as the works of Sandra Pail. Here's one that might, or might not, be a witch with her incubus lover... There will be a casting demo on July 7 at 3pm - postponed from Saturday because of That thunderstorm. Masses and masses of music this week - every pub in Frome seemed to be bursting out with bands like blossom on the Judas tree in Victoria park. (Irrelevant digression: the name apparently wasn't from the biblical betrayer but a derivation of the French name, Arbre de Judée, referring to the hills of Judea many of these gorgeous trees grew. Just an interesting fact, for fact collectors.) 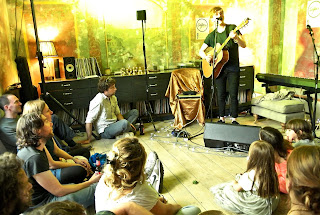 Anyway though I missed most of this being out of action for 5 days (another digression, more relevant this time, the NHS service despite all attacks is at point of need utterly fantastic), I was back on the circuit to hear some great young musicians at the Frome Sofar- here's Josh, and Wedlock, sorry I don't know much more about them than their names but both were excellent. 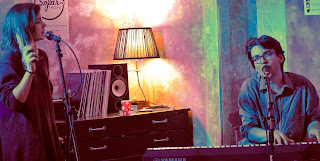 And Sunday's Frome Jazz Club had sax player Jon Lloyd as John Law's guest - an extraordinary rapport apparent between these two - and Billy Weir on drums.

The big thing for me this week, and the reason why this blog has gone all garrulous, is that my book has finally, belatedly, been delivered to the wonderful Hobnob Press and is now under the editorial red correcting pen - I say that as though it wields its own authority but it is of course steered by my endlessly patient & supportive editor. 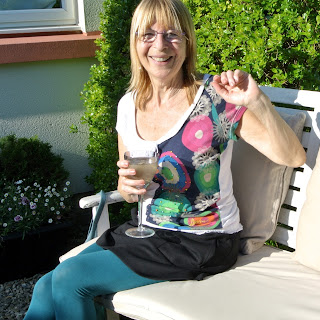 Various people in Frome have been wondering what happened to this project, because I've interviewed many of them, saying breezily back in November that I expected to finish by end of February... yeah, that's right, a history of Frome in four months. I can't imagine why I thought 120 days might wrap it up - it's not as if it's only a bit of Frome either, like a history of 17th century button-hooks and bodkins.  The title I negotiated is FROME UNZIPPED - from Prehistory to Post-Punk, beginning at the ice-age and ending with the call for Frexit in the last Frome Times. It's a bit of a parkour ride, with masses jumped over, but you can get all that from sensible historians. This is more of a street-theatre story - there's a narrative arc, and characters, and everyone I talked to has a voice in the book because I wanted it to be genuinely egalitarian. Nearly a hundred people generously gave me their time and when I'd transcribed all their interviews, along with notes from the sensible historians, with a month to go, I found I had the equivalent of a 5000-piece jigsaw to assemble with no box. Anyway, it's off now, and I've learned so much about this extraordinary town where I came to live back in 1987... what's next? After the prosecco, of course.. (thanks David)
Posted by Crysse at 11:02 AM