Rich drama at the Old Vic - go by toboggan if necessary! 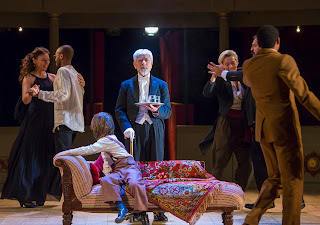 Natural beauty versus profitable land development... a big topic in Frome right now as social media buzzes with opinions about the proposal for our southern fields, and also the issue at the heart of The Cherry Orchard at Bristol Old Vic in a production so fabulous I'm posting this blog early so you can book before it's totally sold out. Lovely to look at, excitingly directed, with a fantastic team of actors - this ticks every box.

Kirsty Bushell is mesmeric as well as heartbreakingly beautiful as the impoverished-aristocrat owner of the orchard in question who refuses to contemplate the rescue-package offered by the entrepreneurial son of one of her own serfs. Intended by Chekhov as an analogy of decadent old Russia losing its grip on the future as the end of serfdom allowed a new bourgeoisie to take control, it's also a moving drama involving complex passionate relationships and this production, with its faux-theatre surrounding all the action, is simply inspired. I'm annoyingly purist about my favourite classics and arrived feeling wary I might find a set made of trampled cherries, or Grisha as a puppet-child watching the action, but everything about this concept is superb with the poignant subtleties and the humour (there's quite a lot that's laugh-out-loud funny too) both exquisitely conveyed. I could say more, and will when in my full review ~ this is just to alert anyone who enjoys classy live theatre: this is essential viewing and it's on till April 7. 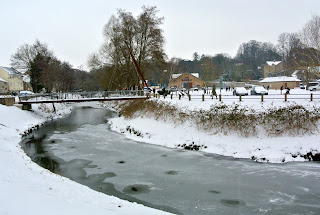 In other news: we had snow, and the hills of Frome were alive with tobogganists and even skiers. The river was frozen too, which I've never seen before, but not quite hard enough for skating. Supermarkets ran out of milk and bread over the three frozen days, 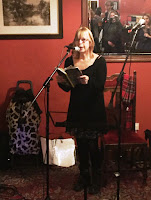 and Three Swans ran out of ale, so the role of hosting Edventure's Open Mic was taken over by Cornerhouse.
A wide variety of music and words, including me doing some of me crone poems, raised funds for YMCA Mendip and Edventure's projects, congratulations all involved & that's all for now, after email chaos courtesy of Site5 I am again majorly behind in my work schedule... I need to get out less.
Posted by Crysse at 3:34 PM