The pelican days are over... 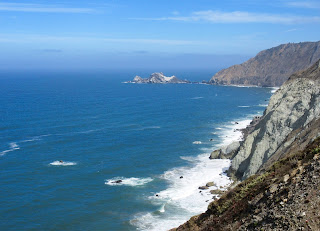 This week the Bay area suddenly remembered California is the Golden State and offered dazzling sunshine for most of my walks. I've spent hours each day on coastal trails from Moss Beach in the north to beyond Poplar in the south, each about 6 miles from my central point in El Granada. Mo has taken me further too, up to the Devil's Slide (still part of the Cabrillo Highway on my first visit, but after constant landslides it's now an environmental reserve) and down to Bean Hollow, where the rocks of Pescadero are transformed into strange creatures by wind and salt erosion. 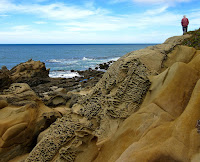 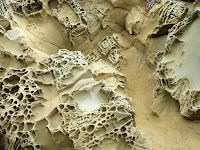 The phenomenon is called tafoni, and is rare and mysterious especially since, unlike the rest of the coastal rocks, these patterns are resistant to further change. I compared the tiny squarish corn-circle-like etching in this picture with my photo from 8 years ago and it's identical in every detail. 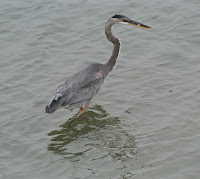 As well as extraordinary rocks I've seen amazing trees: avenues of cedars, creeks overhung with massive ancient eucalyptus, and slim pastel-barked younger ones in elegant rows all the way down from the hills to the sea. I've been dazzled by the range of flower colours continuing up the Highway verge as well as along the dunes and gardens... but more than all that, this trip has been about the birds.

I've spent literally hours watching them fishing along the shore: mincing sandpipers, shrieking gulls, terns and cormorants, elegant herons and snowy egrets, diving murres and endless gangs of pelicans, and inland there are wrens and tits and blackbirds along the paths and dunes, while above the ocean seahawks and buzzards circle high then drop suddenly to glide the thermals like surfboarding teenagers.  Oh and let's not forget the seals: I often saw them basking on rocks along the coast & several times swimming in the bay, lifting their musky muzzles to stare around like curious puppies. 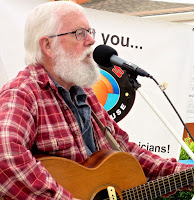 I have of course had people contact too, and trips to places other than the long beach and its wild rocky outcrops, like Alice's Restaurant (of Arlo Guthrie fame), the farmers' market where Mo & his musician friends play & sing, and a fascinating afternoon with the 'Coastside Life Story Writers' hearing their moving memories of wars around the world from Bolivia to Iwo Jima and Vietnam. And I also did quite a lot of writing on my current drama project, though that's still at design stage... but my book project is now close to launch: my editor has sent page proofs & the publisher loves Mutartis' cover design, so I hope to set off the fireworks for this one soon!
Meantime, here's a last look at the bay, and goodbye USA. Thanks for having me, it's been great. 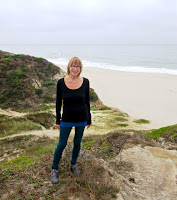 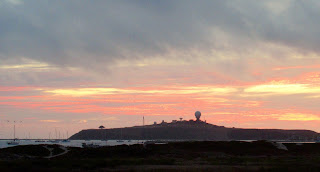