It was a wild and stormy night for Frome's winter Poetry Cafe on Monday but the Garden Cafe nevertheless filled to extra-chair-added maximum for a brilliant night of heart-&-hearth warming poetry. Our two guests are both impressive performers: David Johnson taking us graphically from the steps and shadows of Bristol to a fantasy of the Romantics on tour ("Bob Browning leads off with Oh to be in Frome...") and Hannah Teasdale sharing beautifully crafted personal pieces. The 'open mic' was split between general and mermaid- related poems ~ John Christopher Wood wickedly straddling both ~ and from  seven impressive readings, the tickets for Little Mermaid at the Merlin Theatre went to Sara Morris.

It's show-time all around now. Bristol Old Vic launched their festive offering Sleeping Beauty in party style & with a charming curtain-raiser from Little Bulb Theatre: The Night that Autumn turned to Winter features three lively young performers using stringed instruments, costumes & cajoling to create a woodland of likely and unlikely creatures, including a unicorn. 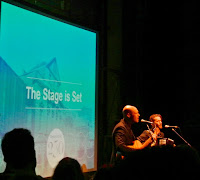 Inventive and often very funny, this successfully appealed to adults as well as littlies, and anyone who remembers Hi-di-Hi's Peggy with affection will delight in Fairy Pat and her funky Mr Fox. After seasonal refreshments BOV artistic director Tom Morris shared a foretaste of next year's events to celebrate 250 years of the venue Peter O'Toole acclaimed as "the most beautiful theatre in the world." Some of the best plays from those intervening years are on the 2016 programme, from Sheridan's The Rivals to O'Neill's Long Day's journey into night, with a mega-party open to all at the end of May. 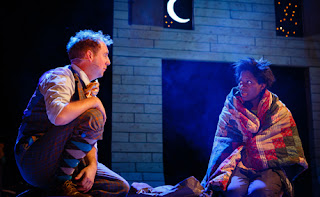 And on to the main event: Director Sally Cookson has a lot to live up to ~ that unforgettable Peter Pan in 2013, last year's inspired 101 Dalmatians ~ and this year's creation is a gender reversal tale in which the denouement-rescue-kiss comes at half-time and is unintentional, as the rescuer is on her own quest for self-awakening... though at the end he rescues her right back, so it's like Pretty Woman but without the glamour. This is a make-your-own-magic story, with jumble-sale costumes and cardboard-looking crowns and some of the capers, like the long conference-call on old-style phones to introduce the fairies, seem somewhat beyond the grasp of a young audience, but the live music is great. 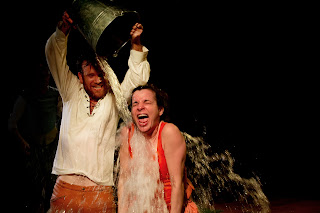 Festive refreshments at the Tobacco Factory too, where the curtain-raiser was a party piece created by the youth theatre featuring pre-teen angst & sugar-rush, and the production is also a royal fantasy ~ a new version of a 19th century princess-story, devised & produced in association with Peepolykus.  The Light Princess is absolutely enchanting.  John Nicholson, who directed & with Thomas Eccleshare adapted George MacDonald's original tale, suggested that like quantum physics the logic of the story is beyond understanding but actually it's refreshingly comprehensible, and the six performers bring a surprising range of dimensions to the narrative. There are quite a few surprises in the staging too, most of them down to the very clever set.  The prince (Richard Holt) and princess (Suzanne Ahmet) are adorable, the performances from Rew Lowe & Amalia Vitale are hilarious, the music is awesome, and the costumes are gorgeous. It's on till 10 January, highly recommended.  images Farrows Creative

Back in Frome but still on things theatrical, Nevertheless Fringe Theatre had a nice little write-up in the Frome Standard for our upcoming production ~ diaries out now, please! TOXIC COCKTAILS comprises "three short plays to turn your world upsidedown" ~ dark comedies about the state of the world which will leave you stirred if not shaken, so contact The Cornerhouse to guarantee your seats for Wednesday 16 or Thursday 17 December.

And finally, if you've been surprised to find Gentle Street full of lobster pots and currently off limits to pedestrians then you're one of the few not agog with the news that Poldark is filming there this week and Aidan Turner is in town. As I don't have a picture of him pacing the cobbles, and I wouldn't post it if I did as apparently Frome is standing in for Truro as there was too much rubber-necking in the last place they filmed, here's a googled shot to cheer us all up on these dark days. (That's ironic. But not totally.)
Posted by Crysse at 6:04 PM