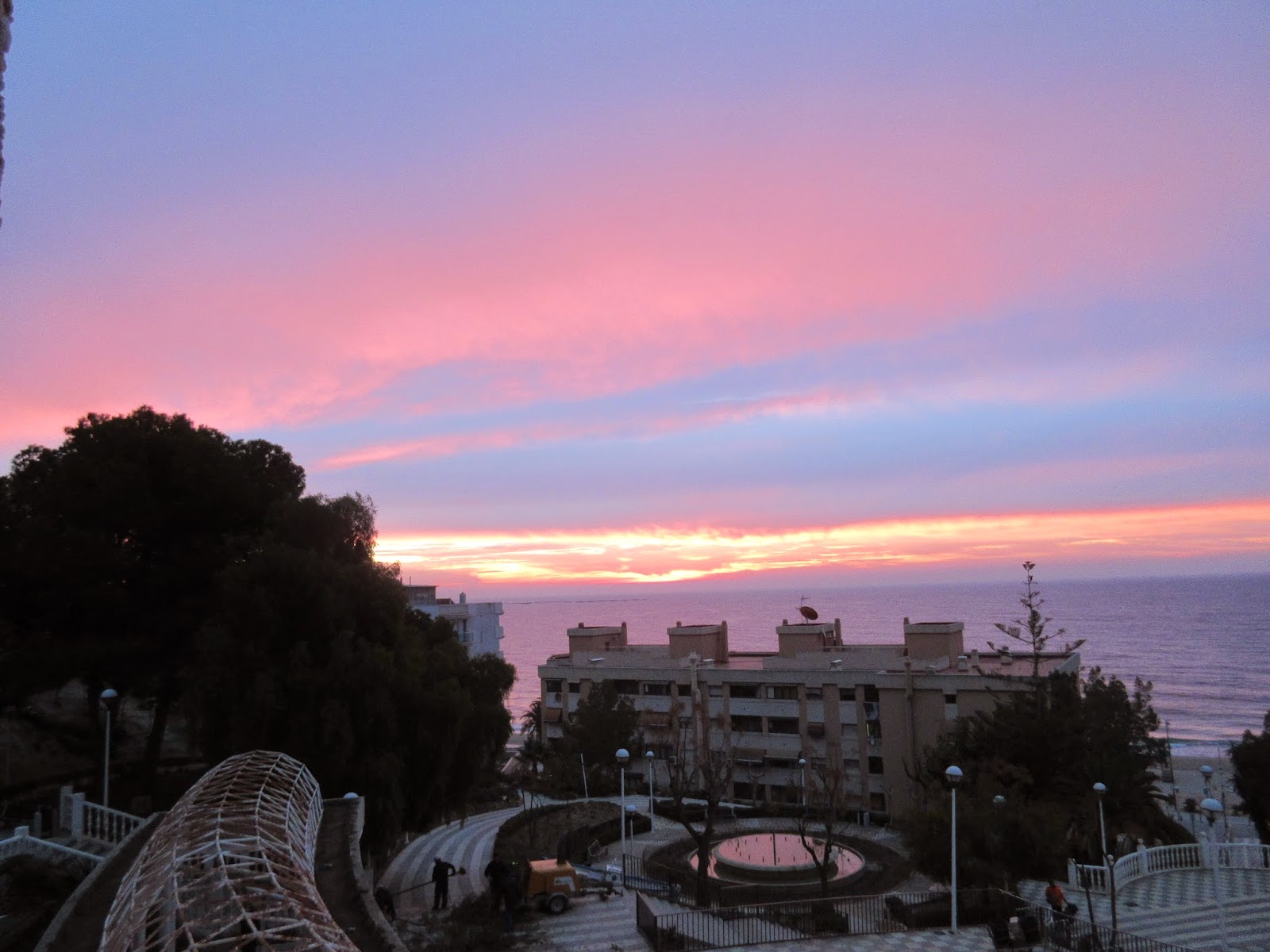 Villajoyosa,  where I spent last week with writer and long-time friend Jill Miller whose blog gives a fascinating account of her eventful & recently nomadic life, has confounded my prejudices against the Costa Blanca for the second time this winter.  Jill and John's apartment features three long windows overlooking a chequered fountain-square beyond which there's a beach of soft sand the colour of warm croissant, beyond which stretches the Mediterranean sea, tone-shifting through turquoise to silvered indigo below an azure sky from golden dawn, on the left, to fluorescent pink dusk, on the right, about ten hours later. We spend these intervening hours walking & talking and sitting & talking, mostly outside, and in evenings go to the wi-fi bar for me to post images of the day's wanderings on facebook. 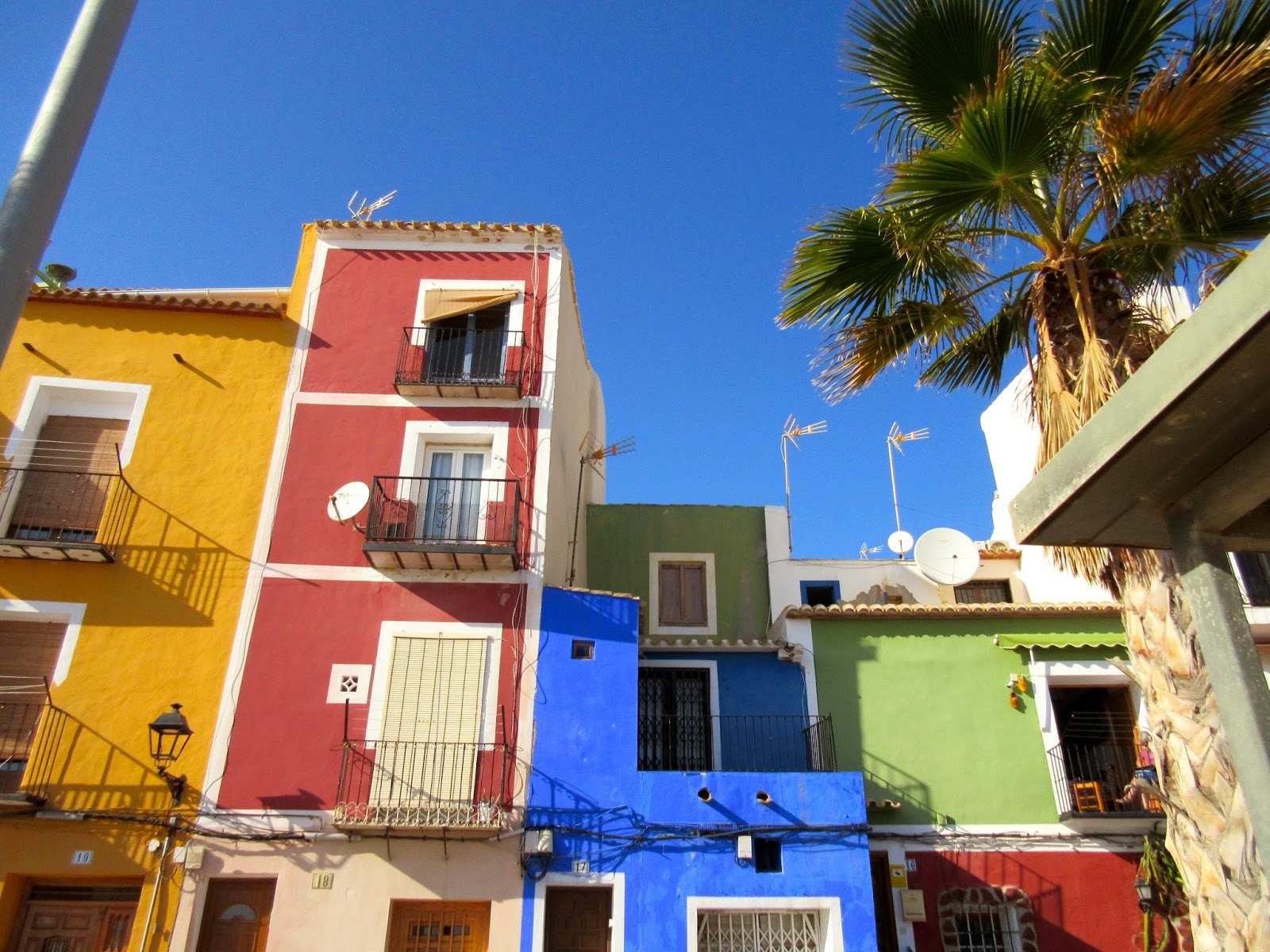 All along the sea front, gaudy apartments in scorching colours clash against a sky so savagely blue that image saturation is totally redundant. Palm trees punctuate the pink pavement and cluster on the beach. I learned (thanks Stephen McParlin) that the vividly painted houses are to guide fishermen home in dangerously bad weather ~ also that the sweaters made by mothers and wives are they can be identified, if necessary, after prolonged loss at sea. This is still a fishing town: we watch the trawlers returning with their catch each evening, swirled around with seagulls.

Another charming aspect of town life is the graffiti on every available public space: what Spanish crews may lack narrative and satire, they supplement by tireless profusion. 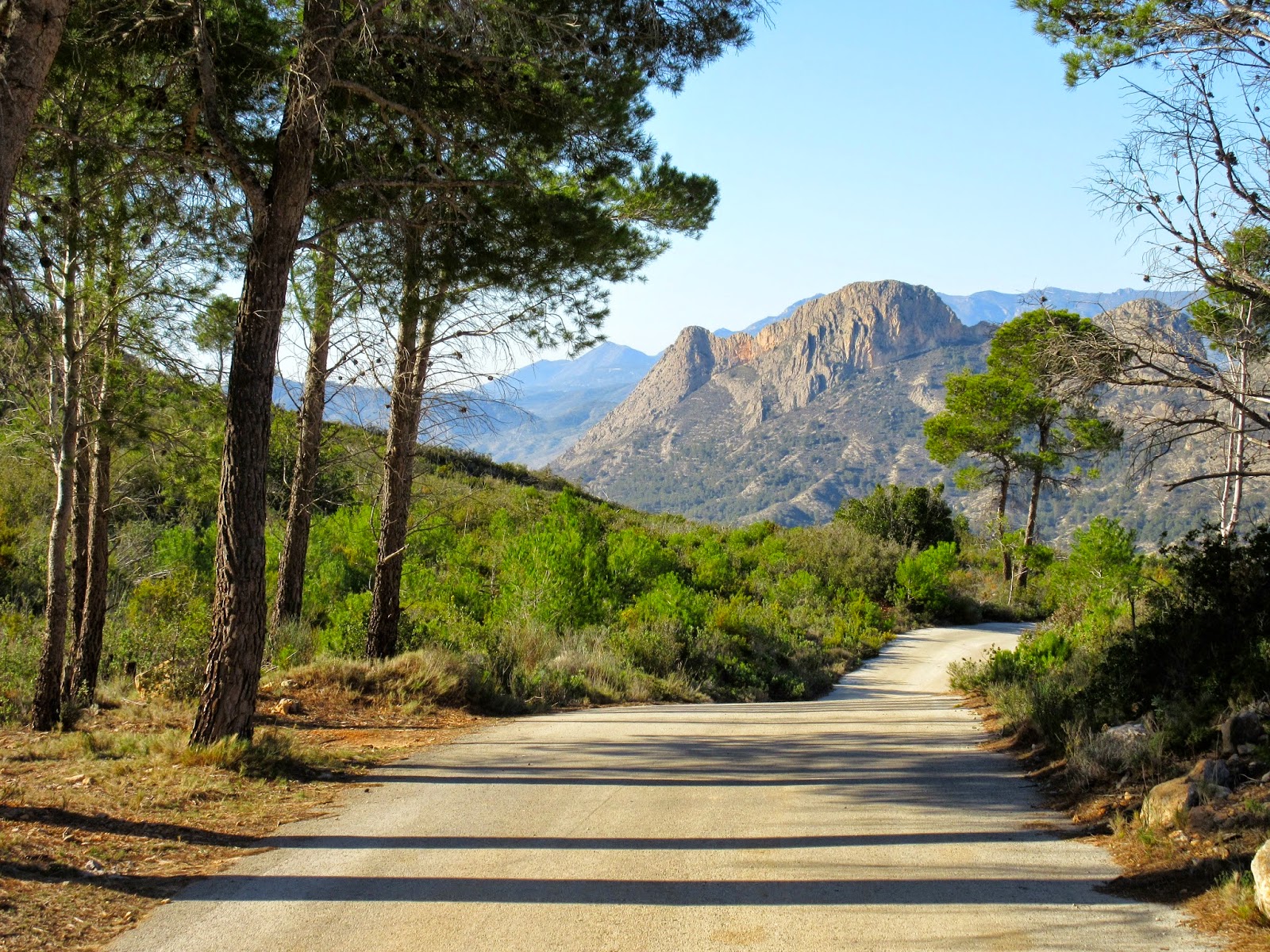 As well as flȃneuring the streets and squares of Villajoyosa we made other sorties, into the mountain villages around Puig Campana (thanks Carole) and a tram ride to Finestrat (every horrendous high-rise cliché about this coast), but mostly we walked along the rim of the town, beyond the marina on the dawn side and past the estuary below the town bridge, where the heron fishes at dusk. And we talked about childhood ~ or more accurately, ways of surviving early experiences. Synchronicitously I've been reading two terrific books which, fictionally (We Are All Completely Beside Ourselves by Karen Joy Fowler) and diagnostically (Kith by Jay Griffiths), both look directly at the lifelong significance of early years. All learning is experiential and there's no absolute truth, but Jay argues convincingly that the dominant culture treats young humans in ways that would be illegal if applied to young dogs.. society has historically contrived a school system that is half factory, half prison, and too easily ignores the very education which children crave. Karen's narrator, Rosemary, uses anthropological material in a very different way: no spoilers, but here's one thought to be going on with:  The value of money is a scam perpetrated by those who have it over those who don't; it's the Emperor's New Clothes gone global. If chimps used money and we didn't, we'd find it irrational and primitive. Delusional. Chimps barter with meat. The value of meat is self-evident.

Email ThisBlogThis!Share to TwitterShare to FacebookShare to Pinterest
Labels: Kith, Villajoyosa, We Are All Completely Beside Ourselves