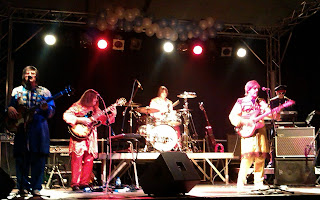 December is a month that melts, slowly at first then like an avalanche as the big Two-Five slides unstoppably towards you. In Frome the upside of this is a glitzy plethora of festivities and music: Ian Ballamy played at the Griffin on Friday, and Saturday was party night at Cheese&Grain as the fabulous Sgt Pepper's Only Dartboard Band rocked out an amazing Beatlemanic medley ranging from early chart hits to Abbey Road, and including Revolver in entirety.  Dancing compulsory.

Cheese&Grain swapped retro for fantasy on Sunday with a SteamPunk market selling everything from punk styles inspired by Victorian modes to... er, Victorian styles garnished with futuristic punk.  I specially liked the adventurers' hats, with goggles & map, ideal for discovering the source of the Amazon, offered by RP Outfitters, purveyors of Steampunk attire, accoutrements & artillery, including fripperies and exterminators for the most intrepid of explorers. A festival for fans is planned for summer 2014. 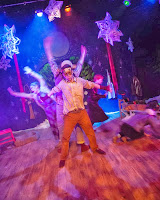 Meanwhile over in Bath, a magical version of The Bluebird by Butterfly Psyche is on at Rondo Theatre, delighting audiences and garnering as many stars in review as on stage. Maeterlinck may not seem an obvious choice for a festive production: the bluebird of this mythic quest represents attainable happiness, true, but the writer himself believed man to be powerless against the forces of fate.  He wanted his actors to be like marionettes, expressing not human emotions but external forces. Alison Farina, who directed as well as scripting this version, evokes Maeterlinck's 'static drama' theory in a musical introduction as dancers from Bath Dance College pirouette like musical box figurines and toy soldiers, but there's a strong change of mood as the story starts with young Tyltyl in a strop with his mother, his life, and especially his babysitter looney Mrs Lune, aka Fairy Berylune, who will send him on a journey into Other Worlds to find the Bluebird of Happiness and change his life. The dialogue is sharp, often moving but never sentimental, retaining contemporary edge as well as classic fairy-tale morals: "It's only when you release your sorrows that you can see the bluebird" Tyltyl learns, braving perils while Fairy Berylune watches Downton Abbey. An excellent cast of five brought every character vividly to life, with some fabulous set pieces ~ the Duke & Duchess of Luxury's crazy feast which wouldn't have been out of place in Tim Burton's Alice, and the Oak King's impressive tirade against man's assaults on the environment, among other marvellous scenes.
And there's magic for children from start to finish, with a great set and an onstage welcome at the 'magic market' where they can trade their christmas wishes for sugar snowflakes and fairy dust, and a bluebird finger puppet to take home.  Add in lighting effects, onstage music, and a very funny dog puppet who becomes real and even funnier, and this show should be unmissable festive viewing for everyone ~ sadly, it's only on till Saturday. So if you live near Bath, that's 4 more chances.
Posted by Crysse at 12:36 AM