The language of love 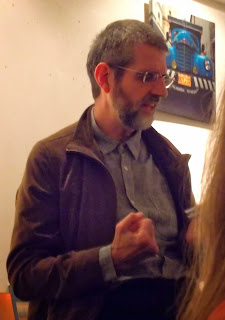 St James Vault in Bath was crowded on Monday night for Poetry & a Pint where Philip Gross read from his latest collections ~ with some gems on the open mic too, notably from Rose Flint, David Johnson and Stephen Payne. Philip's main theme was family routes, rather than roots, and his father's never-talked-of journey from Estonia to England and the poignancy of his father's final days deserted by all five languages he'd once known. The poems are about silence and absence, using extreme precision of language in so visceral a way that listening becomes more kinesthetic than aural. Philip's introductions are profound too, evoking his childhood realisation that 'silence is a language of its own, always quivering with something else like anger... my father passed on a silence the exact size and shape of what he was not saying.'  The passion in his quest to find words for what is unspoken evokes and then transcends the relationship he describes, reaching out to that universal sense of the tremendous / silent language we may some day speak /or be? 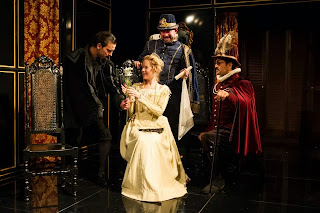 Still in Bath, the Ustinov new season features three plays from the Spanish Golden Age ~ the era of 'comedia nueva', a radical new form which allowed tragic & comic elements, kings & commoners, and varied verse forms all in the same play.  A Lady of Little Sense was written 400 years ago by Lope de Vega using this formula, and this dazzling new translation by David Johnston joyfully combines farce and social satire in a fast-paced romantic comedy as beautifully lit and dressed as if Velazquez had painted every scene. Imagine a version of The Taming of the Shrew in which both sisters need taming by suitors whose eyes are fixed solely on the dowry, with the added twist that while one is sour the other is totally bonkers. It's almost beyond belief that the power of love can transform an autistic simpleton into a woman of passionate eloquence and dignity, but this is the happy transformation that occurs during the interval ~ not that Finea gets any appreciation from her louche but luscious lover Laurencio, who panics that the suitor who previously spurned her may now reclaim her. "I was safe in your simplicity" he scolds her, "I am destroyed. Why on earth did you learn to speak?" The outrageously non-feminist attitudes of all the men would be  shocking if they weren't so absurd and frankly funny. A clever set, pageantry, duelling, dance and song all enhanced this brilliant production directed by Laurence Boswell: some of the clowning was a tad OTT but the high energy and superb acting of the entire cast made this antique comedy of manners a delight ~ and special praise to Frances McNamee so gorgeous as love-cured Finea it was almost possible to believe Laurencio's noble protestation:
Love makes us greater than we are.
What love touches, love transforms;
where it plants desire its roots split stone.
If we love well, then we live well.
And once Finea begins to love,
love will begin to transform Finea.

Email ThisBlogThis!Share to TwitterShare to FacebookShare to Pinterest
Labels: A Lady of Little Sense, Philip Gross, Poetry and a Pint, Ustinov

Interesting Blog Crysse. We neglect the great Spanish plays of the period, perhaps because we are so dedicated to Shakespeare and his contemporaries. Good to know these pieces are being revived.

I think this probably benefitted considerably from the updated translation, which included a few witty anachronisms as well as quite a bit of pruning I imagine, and of course few productions dare take such liberties with Shakespeare. It was certainly more entertaining and, despite the social mores, less spiteful than the bard's "difficult' plays.