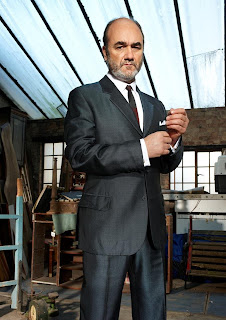 Well that's it, I'll never want to watch King Lear again ~ I'd never see anything better than the one I've just seen at Theatre Royal Bath. Directed by Lucy Bailey and set in 1960s gangland, this amazing production found every emotional nuance conceivable, with David Haig mesmeric as the destructive and self-destroying king. The acting is superb ~ William Postlethwaite's Edgar and Simon Gregor as Fool stand out even from an overall stunning cast, with extraordinary black-comedy scenes between the maddened King, the Fool, and the faux-crazy 'Mad Tom' ~ and what makes this production unforgettable is its sensational imaginative sets... this is an admission from someone who tends to object to anything that vies with the script. But I loved these complex projections evoking scenes from excessive luxurious indulgence to brutal concrete, dissolving in the tempestuous rain into a raw film-set abstraction for the Reservoir-dogs violence of the last act...  terrible, yet so rich I didn't want the play to end.

A fantastic end to a fabulous July, with continental temperatures and blue sky virtually every day so even after the festival there seemed a party atmosphere in Frome... not  just because I had a lovely birthday but because of so many other great events, including the Frome Half Marathon which kindled nostalgia for my own running days (fifteenth woman in the New Forest Marathon 1990... maybe next year I'll enter...)

Someone recently read something similar in The Guardian about a person who refused to go to see a play after seeing a production of it by Propeller. I can sympathise with the feeling (especially with Propeller) but I think it’s wrong.
I agree with Holger Syme that theatre is not narrative, it is experience. The joy of theatre is that every production (every night) is different. Even the most awful productions can have some new and striking. It’s tempting to want to put a play away in a box for safekeeping, but (this sounds rude) isn’t it also just a little unadventurous. If a production really is outstanding it will always be outstanding, in the same way that some works read as books don’t work as well on film or on stage.
I have to admit I do succumb to this; for instance I don’t want to see ‘The Talented Mr Ripley’ on film because I think the book is so perfect. I can’t defend that, though text to film is slightly different, and I have no problems with the other Ripley adaptions (I’ve even still got a grainy VHS copy of ‘The American Friend’). Maybe I’m small-minded after all.

Good points, Neil. I'm glad to inspired such thoughtful & informed reflections but I guess you realised my opening line was more hyperbole than pledge... I'm sure I will see, and enjoy, many other productions of my favourite dramas.