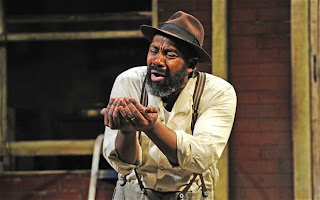 Anyone who ever doubted the towering talent of Lenny Henry needs only to watch a moment of Fences at Theatre Royal Bath to be convinced. He inhabits, with immense passion and subtle nuance too,  the lead role of Troy, a Pittsburgh garbage man with a story both local and universal ~ the essential struggle to find values & certainties in the messy flux of passion and mortality.  August Wilson's 1983 play, set in 1957 as part of his dramatic chronicle of the experience of blacks in 20th Century America, is a wordy script but a strong cast brought emotional insight to each character. Troy like his father before him makes a painful mess of parenting but faces life & death with defiant integrity, as charismatic and wild in his tales as Jez Butterworth's Rooster but still scarred by memories from childhood which are  revisited in a powerful scene that becomes a rite of passage for his own young son.  A complex set creates Troy's house and its (literal and symbolic) fences, and direction also seems to put an emphasis on small details but this doesn't detract from an excellent production of a thought-provoking play. 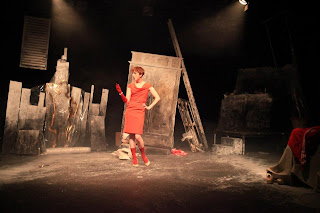 Parental failure again in the evening, as Boy in a Dress stormed the stage of Bristol Old Vic studio. "Third-gendered, fallen Catholic, ex-fashion model La JohnJoseph combines song, vaudeville, proselytising, striptease and post-modern philosophy in an exhilarating collage which explores intersections between faith, gender, class and identity"  ~ I can't put it better than the flyer, he certainly does all this.  It's poignant and funny as well as outrageous, and painful too, but La JohnJoseph is charismatically watchable whether stripping, singing, or musing on a Sisyphusian capacity for pushing my luck.
Self-indulgent maybe but never self-pitying, even when describing a childhood of abuse and being left to care for his younger siblings just like any other teenage mum on the estate. Musical support from Stephen Quinn and paper-darts energised the interaction, costumes and showers of glitter enhanced the glamour. Vox pop from the loo: "best thing I've seen for a long time."

Luke Wright brought his current tour to the Merlin on Friday. The ironically immodest title Your New Favourite Poet met no resistance ~ Luke is hugely popular in Frome from previous visits, and his new Weekday Dad persona as a hands-on parent gave him extra cachet. His performance poems are often  inspired by political sleeze, most recent being the public figure currently in the news (despite his leader's protestations that having a free press shouldn't mean they go finding out about things and printing the bloody stuff) entitled Lord Grope ~ (His sausage fingers on your leg, "It's alright, love, I know Nick Clegg") Much mirth throughout, loud applause at the end, and a long queue for his new book Mondeo Man which has as well as scything social satire some moving personal poems too.

Email ThisBlogThis!Share to TwitterShare to FacebookShare to Pinterest
Labels: Boy in a Dress, Fences, Luke Wright