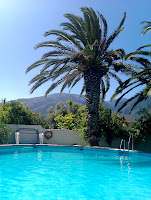 Home again now, after a sublimely blissful week in Cortijo Romero, a haven of tranquility and creativity in the foothills of the Alpujarras. Take gorgeous gardens, shimmering turquoise pool, frequent supplies of fabulous food, and slow-roast gently in steady sunshine, then blend in a mix of fun & physical options like yoga, dance, song, collage, theatrework, & games, and you have a recipe for fourteen happy, fulfilled, participants. For me the creative highlights were two processes I'd never previously explored Playback Theatre superbly led by Amanda Brown, who is officially the goddess patron of empathy, and propreoceptive writing - a magical technique for locating and listening to your authentic inner voice: immense appreciation here to Diane Samuels, who is more than a bit magic herself, for leading our afternoon writing sessions. This isn't a 'Prisoner' paradise either - you can walk down to the local town of Orgiva, as I did most days, and mingle with locals who make no concessions to tourists, so fragmentary Spanish is a pleasing necessity.

Back in the UK, with the closing ceremony only inches away, there's a palpable and pervasive 'Olympics effect' around. It's not jingoistic patriotism, more a kind of surprised positivity, which began with shocked delight that the opening ceremony was so sublimely Britishly bonkers, soared as mad mod Wiggo not only made history on two wheels but tweeted pissed pix of his celebrations too, and crescendoed with the double gold that made Mo Farah the first athlete to launch a disco-dance move to rival the Village People. Or maybe those are just my highlights. But I offer them here, into the pot of general rejoicing. May your own Olympic memories go with you, these moments of awe are the only innocent religion we have.
Posted by Crysse at 11:00 AM