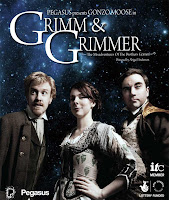 In the fabulously inventive and audaciously absurd world of Gonzo Moose, Wilhelm and Jacob Grimm, the famous fairytale-collecting brothers featured in their touring production Grimm and Grimmer, are just like Jedward, except one looks like Tweedledum and the other looks like Robin Cook. It's tempting to say that, in their various fairytale guises, Seamus Allen and Mark Conway steal every scene with their witty physicality, but I'm aware too that the charm and theatrical presence of Lauren Silver, in the single role of their sister Lotte, is the glue that holds this hilarious chaos together. The plot is essentially pure fairytale: the hero(ine)'s journey, the helpers (an ear, some lascivious elves), the darkest hour (top tip: brute force beats magic) but with a large helping of Monty Python and Gonzo Moose black humour sprinkled in. And blood. "Let's never do that again" say the Grimm boys, back in Jedward unison mode, after the (not-gratuitous-at-all) blood-gushing heart-surgery scene at the end... I've missed a bit of the story, actually. The show came to Bath's tidy little Rondo Theatre for one night only - I think you should all go & see it in Oxford next month. 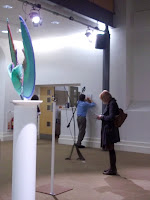 Angels... what are they like? I've known some strange ones. Marian Bruce's amazing life-size installations - arguing, whoring, desolate... The Recording Angel in my play Love Bites, whose smart-arse jocularity would make him voiceover candidate for any celestial Come Dine With Me. Historically of course angels are depicted with feathery, birdlike, wings: the Tom Lomax artifacts exhibited at Rook Lane Arts are more cerebral, calculated apparently according to rules of alchemy, but the tiny ones looked to me more like mangled fondant mice. Whatever one's expectations, Rose Flint's excellent poetry workshop at that exhibition space inspired wide-ranging thoughts and feelings: Linda Perry's magnificent piece accused her chosen angel of looking for bones to hang your bare existence on, and as Rose commented, all our angels were pretty broken. I look forward to next Monday, when I hope to remeet some of these psychotic, traumatised, mutilated, angels struggling towards the Poetry Cafe to be born again....

Still on a poetic theme, a quick plug for Words & Ears, Dawn Gorman's monthly gig in Bradford on Avon, where I'm flying the flag for the Provocative Elder movement next month - also small poetic role as sexegenarian separatist at the fundraiser party for Keep Frome Local on December 1st. 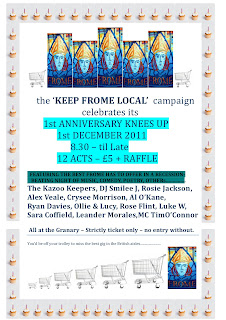