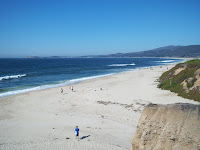 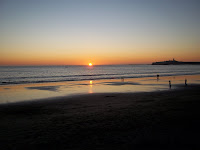 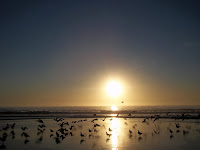 We've had no coastal fog here in Half Moon Bay this week, which means intense blue sky and dazzling sunshine all day. The beach is a scimitar of soft sand for five miles, or a bit more if you take the cliff-top nature trail. These routes intersect at various points between the town and the port (including at El Granada sea front where I join them via the well-used pedestrian access of the big drainpipe under the highway) and after daily investigation - lasting from 2-4 hours - of every permutation, I can now confidently report they are all mind-blowingly entrancing.
The path is popular with cyclists and dog-walkers, but the beach has long stretches generally completely deserted. Near the connection points where there are car parks they suddenly become alive with clusters of picnickers or broiling with surfers, but the seabirds don't mind and nor do I. 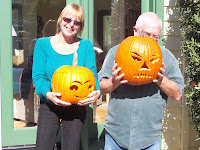 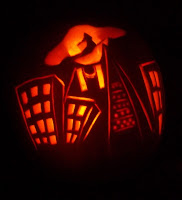 So we've really arrived on Planet Pumpkin now it's the eve of Halloween. Every housefront is decked with ghoulies and ghosties and things that go Boo! on the lawn. Pumpkins are so franticly ubiquitous that every emporium looks like Squash Central, including the canine beauty parlour (devilish dog costumes also available for hire.) Mo and I got busy with the carving knives but our Jack o'Lantern efforts were paltry compared to the winner of the 24th Annual Pumpkin Carving Contest at Farmer John's, for which we were both inexplicably invited to join the judging panel. San Francisco skyline, complete with witch, we unanimously voted first, though I also like OCCUPY THIS! and a teeny muffin-sized squash deemed in candle-lit lettering by its carver BIG. Partying in the maize under the glimmering new moon was fun too.

Finally, since this is - ostensibly - a writer's blog, let me recommend this TED talk sent me by Keith Hart. Fascinating. I've also been intrigued by Bill Bryson's At Home which ranges far from hearth & hall, illuminating all manner of social developments including the response of the 19th Century establishment to the Chartists' London rally: viz,sending in 170,000 special constables armed with swords and muskets. Plus ça change...
..
Posted by Crysse at 11:00 PM

Email ThisBlogThis!Share to TwitterShare to FacebookShare to Pinterest
Labels: Half Moon Bay, Halloween