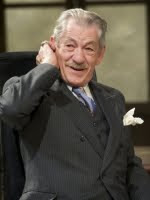 I should have learnt by now. Every bland production I've seen at Bath Theatre Royal has been memorable only because enough money for a brace of bankers' bonuses has been thrown at it, and that was certainly the case with The Syndicate opening there last night. Wonderful set, atmospheric lighting, and immaculate costumes effectively evoked 1960s Naples despite the theatre's fussily refurbished surroundings, and the stella cast all shone - we even had Cherie Lunghi in a bit part (literally - she bares her chest after being savaged by a dog, so actually she has a tit-bit part, as my companion quipped). But none of this could disguise the weakness of Eduardo de Fillipo's play in both structure and dialogue - and I had issues with the concept too.

Ian McKellen is Don Antonio, a transparently-disguised mafia figure who self-glamourises himself as a Mister Naughty-But-Nice, overlording his squabbling community. In fact he revels in brutal domination, abuses friendship and relates more to his savage dogs than to his wife, yet his self-indulgent ramblings combined with a quasi-religious 'last supper' scene appear intended to encourage sentimental affection for the bullying old thug. Perhaps the Just-one-cornetto! accents affected by the cast were meant to enhance the charm of this synthetic story. Sean Mathias over-directed to distraction: characters striding around with props, moving chairs, shadow-boxing, polishing their shoes... ceaseless stage business which could not redeem a play that delivered a few sparse laughs but remains basically flawed. "Eduardo de Filippo was one of the great figures of European theatre. But this-" as The Guardian's Michael Billington tactfully puts it, "strikes me as one of his lesser pieces."

Bath is currently gearing up for the annual Jane Austen Festival featuring, among other Regency fancies, two short performance pieces written by my friend and Nevertheless Productions colleague Rosie Finnegan. This represents triple success for Rosie this month, as her monologue The Last Night Party is one of a quartet about to begin an autumn tour with Bootleg Theatre Company - maybe at a venue near you!

And still on things theatrical, I'm delighted to see our choice for Nevertheless Productions' in Frome Festival, Lullabies of Broadmoor, harvested a sheaf of 4-star reviews in Edinburgh before heading to London where Sam Marlow in The Times enthuses: "Steve Hennessy’s quartet of plays ooze violence (but) are thoughtful, compassionate and fascinating, too; superbly acted by a role-swapping, four-strong cast. Hennessy’s writing is playful and profound... four hours of drama that is disturbing, distressing, and richly absorbing."

Logophiles' corner: commentators are indignant about the new edition of the Oxford English Dictionary, bemoaning the loss of charabanc to make room for various johnny-come-lately terms. I don't think they need worry. Personally if I need to refer to such a vehicle I won't avoid that charming piece of franglais any more than I'll use the clumsy trendyism helicopter parenting to sneer at over-solicitous mums, and I guess most people will continue conversing to communicate rather than to be à la mode Oxford-stylee. But explosions of spleen against 'invasion of our language' are a frequent journalistic theme, interlopers generally being accused of transatlantic origin even when as Old English as gotten. Googling Americanisms raises a dust-storm of protest, petulance, carping and bickering. Zounds, I say. We can always use new words - and I'd like to propose one much needed, as an alternative to the hideous term fuck-buddy: a fwab - Friend With Added Benefits. All those in favour say aye or yeah according to preference.
Posted by Crysse at 4:00 PM