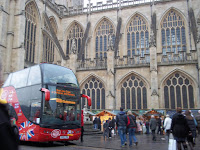 Bath Christmas Market... a kindof vast outdoor stocking-filler warehouse, spread all around the abbey like brandy butter around a pudding. It throngs with near-gridlock crowds and has apparently been sprayed with gullibility dust that makes us avid to hand over notes of absurdly large denomination for small sewn, carved, and painted, gewgaws you'd normally pass to a charity shop without a pang. Great fun.
I met up with my writer/editor friend Diana Cambridge in Café Rouge too, for festive planning. 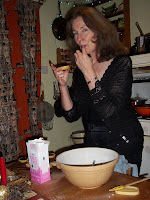 And the Fromesbury Group converged at Emily's for our midwinter jolly, with our very own Nigella hostess providing mulled wine and the most decadently delicious mincepies on the planet.

Until this week I'd never heard of the great Russian producer and showman Diaghilev, called by Jean Cocteau 'Cet ogre, ce monstre sacré" and by himself a charlatan with no principles. From the Ballet Russes exhibition at the V&A, I learned that he was a catalyst and trend-maker before and between the wars - and a user and abuser of all who worked for him, including the ballet dancer Nijinsky, whose mental illness and death were allegedly caused by Diaghilev's treatment of him when their affair ended. But whatever his private life, his artistic influence on the early decades of the last century was extraordinary: Picasso, Matisse, and every great composer of the century. Diaghilev bragged he had no interest in achieving the possible, it was only the impossible that interested him, and his ground-breaking work shocked society, notably with Stravinsky's Rite of Spring which caused a riot at its premiere. Diaghilev founded his Ballet Russe when Imperialist Russia was high status in the cultural world, but he ended his life a stateless exile from Bolshevik Russia, still touring. A dazzling exhibition, informative, richly decorative, and totally absorbing. 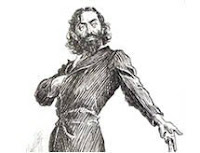 And then on to the Finborough for a Victorian melodrama - Trilby, a sensation when first produced just before the turn of the century. This is the story of a svengali-character far worse than Diaghilev: the actual Svengali, the preditor-hypnotist who represented the anti-semetic fearfulness of the English. Like Shylock, like Dorian Gray's Lord Henry, he's a decadent dream-maker: he transforms a pretty girl into a popular singing sensation but at a terrible price... actually that's beginning to sound more like Simon Cowell than Shylock. A stonking cast, especially Rebecca Brewer's beautiful and endearing Trilby, did full justice to this revival, revealing resonances of brutality and mental cruelty that are as timeless as love itself.

Finally...Facebook has become my morning window to the world. It's an intriguing fleeting magazine of media news (how politicians voted on student fees, how police & BBC interviewers deal with a protester in a wheelchair), what my friends are celebrating, lamenting and laughing at, event invitations, esoteric videos and literary recommendations. Which is how I came across the New Yorker roundup of best poetry collections, including Don Paterson's Rain. described as showing "what heartbreakingly small difference beauty can make in the world. This is fascinating work, a poet having a brutal argument with his art in his art."
A good aim I think for a dramatist too.
Posted by Crysse at 8:00 AM