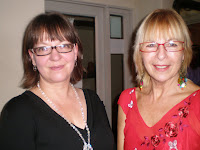 Panto night at Poetry Café on Wednesday saw the Garden Café crammed for Paula Hammond's adjudication of the poetry and prose performances at the annual Merlin Pantomime Poetry Café night. Eighteen contestants for prizes - theatre tickets and panto merchandise – delighted the packed room with an amazing diversity of moods and memorable moments. “That’s not my name” was the theme, since this year’s Merlin show features Rumpelstiltskin, and stories and verses all celebrated identity. 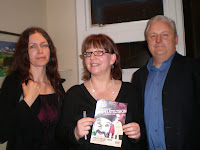 Everyone had their own personal favourites, but Paula’s final pick was popular: Phyllis Higgins and Linda Perry, both with a witty take on the theme, took runner-up prizes, with Dianne Penny and Gordon Graft joint First. Both these talented performance poets brought a personal angle to the seasonal spangle, thought-provoking as well as moving.

Over in Shepton Mallet, another pantomime night as the students of Musical Theatre School gave us a preview of the future with a zany but very sweet version of Cinderella. Nicholas Morrison, totally charismatic as the king, is the one to watch out for. Kookiest moment: ensemble rendition of 'That's why the Lady a Tramp' around Cinders' mother's grave...

Bath was abuzz on Saturday, pedestrianised streets as slow-moving as an easyjet check-in, though with more entertainment, stalls selling woolly hats & world's smallest kites, and a lovely girl giving "Free hugs - because it's Christmas!" I have an urban shopping policy: never buy more than 4 things, the first of which must be a large coffee. It works fine, allowing time for trying on unsuitable glamorous garb and general browsing, and today to watch Where The Wild Things Are. 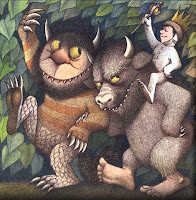 Sendak's story was a family favourite in my bedtime-reading days so I couldn't resist seeing how even the genius of Spike Jonze would stretch a slim picture book to a 100 minute feature film. The answer is: surprisingly well as long as you don't expect a children's movie. It's all about a child - the beautiful, naughty, constantly endearing Max Records as Max - but that child, you quickly find, morphs into your deepest self and probably everyone you've ever known and loved. This is not cosy viewing. We're shown in painful detail why Max made mischief in his wolfsuit. His journey through the dark night of the soul lands him in a place he can understand because it's full of rage, rejection, and loneliness - each of these furry monsters is angst-filled as an RD Laing textbook. And Max, to avoid being eaten, has promised to be their king.

All is well for about as long as it takes for a chronically insecure bunch of dysfunctionals to realise that a wild rumpus isn't much cop as a regal policy, and Max discovers all over again the hostility of strangers is nothing like as bad as upsetting those you love. He admits he's not a king, only a Max. "That's not much" scoffs his fiercest, darkest, alter ego - the one he most needs to reconcile with. And reconcile he finally does, with a long wordless howl across the sunset sea. As you'll all know Max gets safely home for his supper in the end, no spoilers here - just a warning: take tissues, not tots. 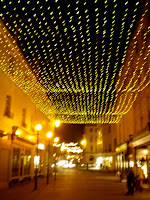 Emerging from an afternoon show in winter is eerie: people-packed streets have emptied and street-lights have inherited the kingdom of dark Bath, a solitary busker on the corner strumming a song of his own devising:
Shoppers are gone
It's too late, girl, too late...

Still on a festive season theme: Carol Ann Duffy's poetic-laureate version of The 12 Days of Christmas (read it here) caused raised eyebrows for its dark imprecations against politicians, bankers, celebrities, racism and war. Fellow poet Roger McGough comments "She's using her new post in the best way." And so say all of us. 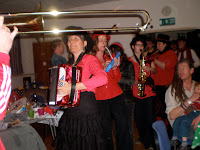 Over at Nunney, during a great afternoon of live music - with bar, Sunday papers and the spanky Frome Street Bandits- this familiar carol was also caustically reinvented by Douglas Hamilton, with an internet twist and a message that would not display... All together now!
..
Posted by Crysse at 11:00 PM