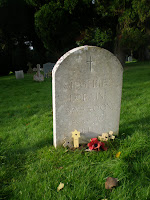 Ninety years ago to the month, Siegfried Sassoon wrote Memorial Tablet, a poem as full of anger about class divisions as about war itself. His grave, in the sombre yew-shadowed churchyard of Mells near where I live, is often honoured with red poppies, and always on Remembrance Sunday. 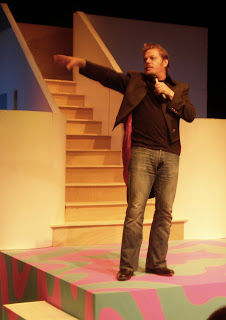 Merlin Theatre foyer turned tardis on Monday night, as an auditoriumful of audience crammed through to see the magnificent Eddie Izzard in a one-night-only try-out of stuff for his new London show.
It's a sell-out there too - here tickets were going on eBay for £160, and I'm sure the buyers were delighted - my eyes were sore next day from weeping with laughter. Eddie's new stuff circles "like a cow with a gun" from Obama through the fallacies of world history through Wikipedia, Galileo, Genesis, stromatolites, stone-age scrabble, squirrels, Spartans, creationism, arriving back at Obama and the possibility of hope for the future. "Terrorism exists where there is no hope" he says simply, at the end of two hours of surreal humour, unflinching satire and brilliant mime. I wish we could elect our own God, my vote would go to Eddie Izzard - even though he doesn't believe we have or need one. "I believe in humans" he says, "Good and evil are in your tummy. That's our fight, how to live our lives."
..
Posted by Crysse at 11:00 AM