Detecting writers from their letters... 'Miss Austen Regrets', now on DVD, is based on Jane's. Cassandra destroyed most of them, whether to protect her sister's reputation or in the anger stage of grief is not known. But from the remaining correspondence, dramatist Gwyneth Hughes constructed a sparky script as far from those La-Mister-Darcy! bosomy bonneted sagas as a script could be, considering references to Jane's most famous romantic hero were as prominent as those costume attributes. Dialogue is fruity with Janite drolleries, as when the novelist visits the Prince Regent's palace: "I have read them all..." purrs the librarian, "Twice. Will you have cake?" The story's premise is thought-provoking: Would Jane Austen's novels have been penned if she had not gone back on her early acceptance of a proposal of marriage? And did she truly believe loneliness a small price to pay for personal freedom?

Only 10 lines survive from the letters of Emperor Caesar Hadrian Augustus to his eventual successor Antonius, I learned from the exhibition at the British Museum. I'm not a big fan of hi-hype cultural must-do stuff, which is why I've resisted Mama Mia, generally agreeing with Miss Jean Brodie that 'For those who like that sort of thing, that is the sort of thing they like'. For 12 quid you get to walk round a gallery crammed with monster-sized sculpted heads & architectural reconstructions, and wallpapered with locational photo-shots & maps, but that scrap of papyrus was the most moving exhibit. "I am impelled to write to you as follows, not, by Zeus, as one subtly devises a tedious account contrary to the truth but rather making a simple and most accurate record of the facts themselves." Nothing beside remains... 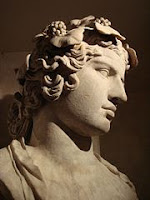 It was interesting to discover Hadrian came from a Spanish family, that his lover drowned in the Nile during the anniversary celebrations of the drowning of Osiris in the Nile, prompting a cult that at one time rivalled Christianity, and that those classic white marble statues were originally gaudily painted & embellished with metal eyelashes that must have made them look like gross barbie dolls... but my biggest shock & awe moments came watching people hand over their life savings for crap snacks at the museum cafe. 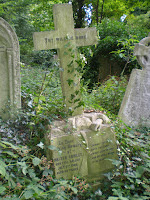 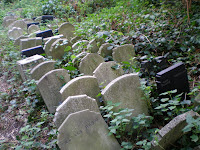 Then on to Stoke Newington, to spend the evening with my writer friend Jane d'Aulby discussing literature, life, happiness, and the pursuit of liberty at The Fox Reformed. Stoke Newington is evolving, Jane says, using as indicator that essential truffle oil became readily available but you couldn't find a white sliced for love nor money. The urban renewal scheme has turned pavements into community art projects and restored to creepy glory the amazing Abney Park Cemetry, popular for spookie movie making and other flesh-tingling activities as darkness creeps in. Sally-Army founder William Booth is buried here, probably rotating. 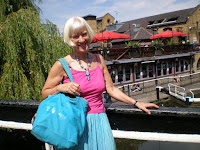 A trip to London is always a chance of a mini-holiday, so I booked a late train home to spend the day with another writer friend, Christine (Dangerous Sports Euthanasia Society) Coleman, walking round Regents Park and down the canal to Camden Lock to browse the markets and enjoy the sun. 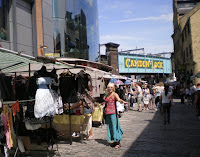 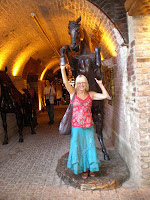