Kalo Paska! Greek Easter is as far behind our as their summer is ahead. 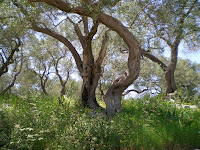 On Paxos island the paths through dappled olive groves are already swathed with golden carrot flowers and broom, wild gladioli and garlic, mint, oregano, and thyme. The asphodels are beginning to seed and the aphrodysiac blue hyacinths nearly over, but the pretty purple parasitic mock-orchid broomsrape is profuse, and real orchids are emerging. 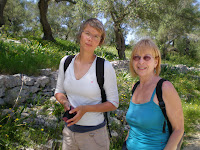 Jana, our friend and my reason for being here, is path-Minerva of the island. She recognises each trail literally stone by stone, since she's cleared most of them herself, and knows the history of each ancient cistern, mill, basilica, and village. The cisterns - sterna, locals call them, are amazing: there's no running water on Paxos (the main reason it's escaped mass tourism) and since the first inhabitants rafted across from Corfu, finding water has needed ingenuity and hard work. Wells were chiselled from the non-porous rock, and settlements developed around this essential supply plus the need to hide from pirates. Hence the profusion of ancient connective routes. 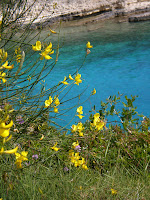 I've come to see, and write about, the reclamation of these old paths zigzagging across this tiny island. Almost every turn gives another glimpse of the sea, indescribably blue. Our villa pack describes this crystal water as aquamarine silk but there's turquoise brilliance too. "It's like headlights under the sea" says Christos. 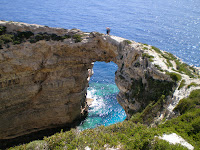 We've spent the last 6 days blissfully wandering these wild flower paths, stopping by white pebbled bays, and after dark watching the strobe dance of the fireflies in warm night air below our villa on the southernmost tip of the bay. 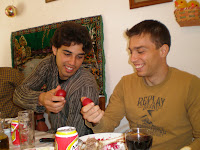 On 'Big Sunday' we went with Jana and Colin to share a greek family meal of pascal lamb and eggs dyed blood red. 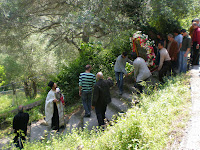 Monday was even bigger: a procession from Ipapandi Church in the oldest hillside village, with bell ringing, fire crackers, and chanting - and flowers, blood-red and pure white, strewn on the path of the icon all the way to the sea front at Lakka. Kristo aneste - Christ is risen, the followers greet each other. 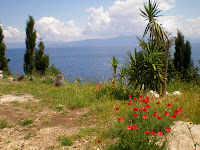 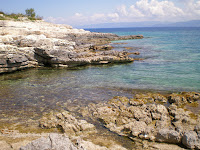 But they also say here Poseiden fell in love with the nymph Amphitriti, and with his trident sliced off the most beautiful end of Corfu to make a paradise hideaway...
"This division between past, present, and future doesn't mean anything, and has only the value of an illusion, tenacious as it may be." - Einstein, apparently.
Posted by Crysse at 12:40 AM

Email ThisBlogThis!Share to TwitterShare to FacebookShare to Pinterest
Labels: Paxos