Monday was officially the most depressing day of the year, apparently, since we're over the excesses of December and still a week till payday. Unfazed, the Words@FromeFestival planning group had a really good meeting. January is always the crucial one: brochure copy nearly due, so grandiose plans have to be sharply tailored to dates, times, and venues. We've got a great programme this year, we think, with a huge range of writerly interests catered for and a mix of big names like Matthew (Life on Mars) Graham offering a workshop, to fringe fun like soapbox poets spouting every hour in Cheap Street. And the usual everything-in-between. What I love so much about Frome festival is that the 'literary' bit really does support writers with chances to learn and to share, so is much more participatory than many well-established fests crammed with talks that are really only glorified book-signings. Or am I just being overly partisan? Let's think...... mmm...No. 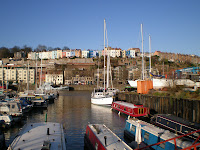 Lust is a strange compulsion, especially for places. For some people it's an I-must-go-down-to-the-sea-again yearning but for me it's Bristol docks. I've no idea why, perhaps I was a footbridge in a previous incarnation, or a swan, but I love that quayside, especially the walk from the marina to the Arnolfini, especially when - after a week of baleful rain and flood warnings - the water glitters under blue sky and sunshine. 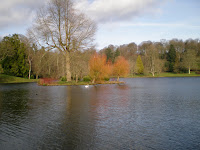 And here's Stourhead, where Greek gods lurk around the lake and lots of burgeoning things are happening on the trees and shubs. Persephone must be packing her case already.

In celebration of Burns Night, 'Oh what a performance' featured several poems with a scots connection on Friday, though some (like the Scots chiropodist's ode to feet, 'the perfect stocking filler') were a tad tenuous. 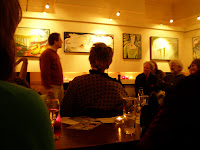 The gallery room at St James Vaults was overflowing with Bath bards, and the constantly recurring theme - apart from phalluses, obviously - was climate change.
David Johnson as guest poet led the charge, managing to make doom entertaining as well as, well, doomladen.
Most popular 'from the floor' was Lee Coombe's medicine monologue, with warnings escalating from dizziness to visions of angels and existential angst. (Alan Summers, of With Words, comments: "marvellous poet/comic story raconteur, a cross between Michael Caine, Jack Dee, and Hannibal Lecter, only better looking and funnier.” )

Happy Birthday Serendipity! Someone mentioned the origin of this wonderful word for happy accidental discovery, and I find it's 254 years old tomorrow... coined by Horace Walpole on 28th of January 1754 in a letter to a friend about 'a silly fairy tale, called The Three Princes of Serendip' in which their highnesses discover things they were not in quest of. I'd love to say I discovered this by serindipitous accident, but actually I wikipediaed it.

And finally....
One of the pleasures of living alone is not having to shop for food, hence my serendipitous indulgence in the vibrant cafe life of Frome.
On Black Monday, as the papers are calling it though for fiscal reasons unconnected with my erratic eating habits, I survived on Alison's sandwich and some crisps at our evening meeting, so next day was out early & hungry for Jon's veggie breakfast at the Garden Cafe, served with a freshly brewed newspaper. Which is where I saw this great quote from Jane Birkin. Asked what she sees as the greatest threat to the arts, this wonderful sexagenarian said simply: "I can't see one - art is so important. If you shut down all the theatres, people would act in the street."
Here's to all of us actors in the street theatre of our lives.
Posted by Crysse at 12:42 AM