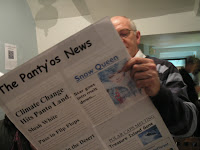 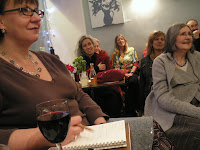 Frome FM ended its pre-festive run yesterday and Frome Spectacular launched the official season of intensive merchandising and ho-ho-hoing. This annual civic celebration kicks off in early evening, at which point the most spectacular thing seemed likely to be the storm, but luckily the worst of the gusting rain subsided in time for the “Aaaaah!” ceremony of switching on the tree lights; bands played, bells rang, and the fireworks were indeed truly spectacular.
So now it's officially panto season, the Poetry Cafe pulled out the box of decorations from the attic with a Snow Queen Night on Monday - 18 performances of stories and poems, all enchanting in their different ways. Merlin Theatre Director Paula brought a fistful of tickets as prizes - the only ones left as the pantomime has sold out for the entire run - which Mike-the-mic and Phyllis Higgins took home. Good to hear new readers too, and wonderful to have such diversity of topics and treatment, but the Paula's final pick was a popular choice: both Phyllis and Mike surprised us with comedy performances very different from their usual genre.

Still on a theme of full-house attendance, Alison led the monthly self-help writers group at the library - we really must think up another name, what kind of acronym is FSHWG? - with an excellent session on short stories for writers looking ahead to the 2008 festival competition, which Katie Fforde will judge. (Last year's winners can be seen here)

Nearly solstice, long nights turning towards renewal. My thoughts turn to decluttering. Decluttering is one of those things like mending a hole in the roof, you can't do it when it's raining and when it's not raining you don't need to. With me, if I'm feeling upbeat I'm not bothered about this life-debris and when I'm down it's all too sad... a little at a time, says Emily. 10 minutes is enough. Remember it's not your past you're trashing, just stuff. And I know too, as with writing, these chronciles of a life are process not product, and need no storage.
So with these maxims and some black bags maybe some kind of start is possible, though all I've done so far is start a 'de-cluttering for the terrified' group on Facebook. Six members already, but as James Nash confesses 'I have never knowingly thrown away anything belonging to me.... the very thought makes me feel a bit shaky!!' I may not get many tips. 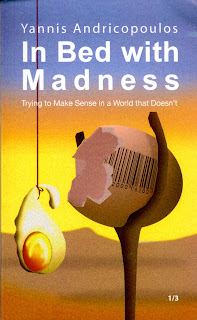 On a more serious note, I’ve been reading ‘In Bed with Madness’ by Yannis Andricopoulos, co-founder of Skyros. ‘Trying to make sense in a world that doesn’t’ is the subtitle of the book, and the theme of a trilogy. “I have written it”, Yannis says “with my whole heart and soul”, and it’s clear this is so. It's a dark picture but painted richly, full of soundbites that snap at the heels of your conscience. Many of these are Yannis’s own; he cherry-picks through the greatest minds of this and every other century, too, creating a treasury of quips quotes and comments. It’s a well-argued, powerful, profound indictment of contemporary culture, which ends paradoxically with hope. The next books, ‘The Greek Inheritance’ and ‘The Future of the Past’, will explore that optimistic thread from the model of ancient Greece. Yannis Andricopoulos knows whereof he speaks: he’s written three books on the history of his country and reported around the world as foreign correspondent. This is a series that deserves attention.
Publication is March 2008 by Imprint Academic (preorders: sandra@imprint.co.uk)
..
Posted by Crysse at 1:00 PM